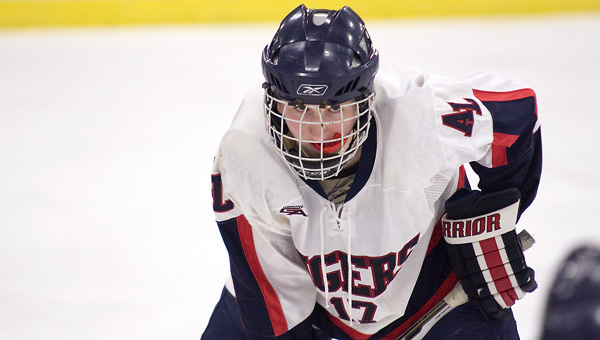 Brandi Hagen/Albert Lea Tribune Albert Lea's Matt Cheever watches for the puck to drop during the third period of round one of sections on Tuesday against Austin.

The Albert Lea boys’ hockey team will advance to the quarterfinals against New Prague after a 6-0 win over Austin on Tuesday.

Albert Lea beat Austin at home 12-3 and away 10-0 during the regular season.

“That’s not the tournament,” Tigers coach Roy Nystrom said. “This is the tournament now and Austin naturally wants to make a good showing and I thought they did. Six to nothing is a running-time game, but we had to work for our goals.”

“That’s pretty much domination down there,” Nystrom said. 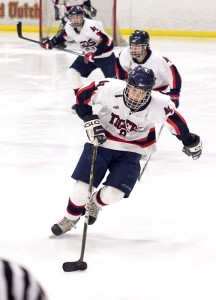 Austin’s coach Tim Peterson said the Packers just didn’t have an answer for the shots, especially when the team started to tire out after the second period.

“We were running mostly two lines and I think they just outlasted us,” Peterson said.

The shots on goal doesn’t speak for the way each team put forth an effort, though.

“When you put 55 shots on goal and you only get six that’s a pretty good goaltending performance for the other team,” Nystrom said.

“I’m disappointed that we lost,” Peterson said. “But, I’m happy with how hard we competed. They definitely came out and laid it out on the line for the last game and gave themselves a chance.”

Nystrom said the Tigers could have cashed in their offensive opportunities sooner in the game, but still had control of the game from start to finish.

Levi Hacker scored the Tigers first goal with 57 seconds remaining in the first period. He made their second just one minute into the second period.

“He’s our strongest player and they know that, too,” Nystrom said about Hacker, who is leading the Big Nine Conference with 43 points. “They were on him all night long.”

Because Hacker was so heavily guarded, four other players stepped up and scored for Albert Lea. Adam Herbst, assisted by Eli Malimanek, scored the one other goal in the second period with 11:49 remaining. Auston Larson, Andrew Thompson and Matt Cheever each scored an assisted goal in third period.

Ready to file the win away, Nystrom’s mindset is on the next matchup.

“We’re tuning it up for the big game with New Prague on Thursday. It’s a team we played earlier in the season and we beat them 2-1,” Nystrom said.

Nystrom is concerned about a repeat of last year’s section game against the Trojans. During the regular season the Tigers had won 2-1, but during the semifinals the Trojans won 4-1.

The Tigers will travel to New Prague on Thursday for round two of sections. The game will start at 7 p.m.