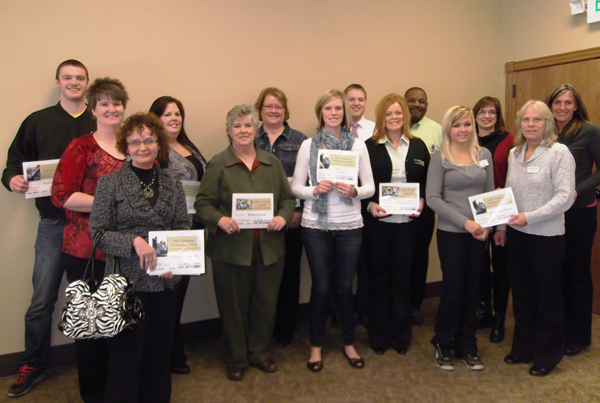 The United Way of Freeborn County held a lunch and open house to celebrate the 2011 Live United campaign on Feb. 15.

The organization raised just over $600,000; the goal was $661,000. The event on Feb. 15 was a chance for United Way to recognize its board members, volunteers, agency members and campaign members.

“It was wonderful to have everyone together in one room to celebrate the community’s effort,” United Way Executive Director Ann Austin said. “It takes everyone together to accomplish the tasks we did in 2011.”

Before the open house, the organization held its annual meeting. In 2011, the United Way of Freeborn County participated in various initiatives to promote community involvement like Pioneering Healthy Communities, where it worked with local volunteers to complete the mural project on the Culligan Water building in Albert Lea.

The United Way also worked with community members to help with projects that promote awareness of local hunger issues, expansion of the debit card program at the Albert Lea Farmers Market and increasing local food supplies and usage of local food programs.

The Drug Drop Box located at the Freeborn County Courthouse collected more than 208 pounds of unused prescription medications and narcotics in 2011, and the United Way helped get the drop box up and running.

The United Way also launched a website, Volunteer Freeborn County, which features volunteer efforts, a Volunteer of the Month and opportunities for local people to volunteer their time.

In 2011, more than 2,500 donors contributed to the campaign. Through workplace campaigns, almost 1,900 people donated and raised more than 60 percent of the total campaign.

There were 680 new donors, and almost 200 businesses participated in the campaign. The following people and businesses received recognition at the celebration:

Companies in Freeborn County that had 100 percent employee participation in the 2011 United Way campaign:

Mayo Clinic Health System in Albert Lea with an increase of $5,451.

Advocate of the year: Mary Laeger-Hagemeister.

Volunteer of the year: Jane Knutson.