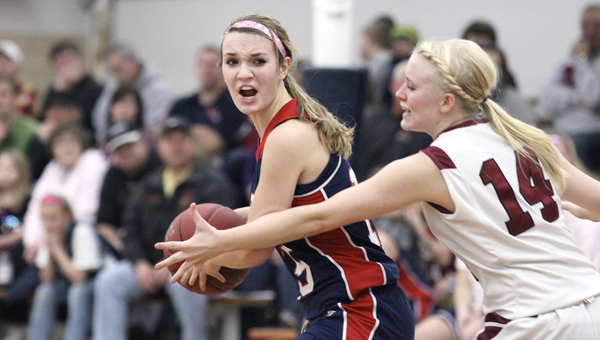 Brandi Hagen/Albert Lea Tribune Abby Trio shouts out a play to her teammates Thursday. The Rebels beat the Cobras 53-44.

The Rebels’ win held Triton to a 0-6 record in Section 2AA.

Amanda Allis also helped to carry the team with 12 points, six rebounds and one assist. USC coach Stu Hendrickson said Allis has joined Ovrebo as a record holder. She has broken the school record for blocked shots in a single game, season and a career record. As a junior, her career record is currently around 160 shots. She has blocked more than a 100 just this year. 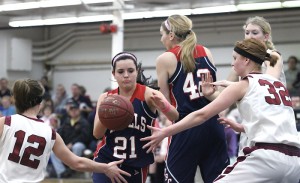 “Katie and Amanda both played really well tonight,” Hendrickson said. “We like to have three scorers, but at least tonight those two were putting the ball in the basket. Without them, it would have been a different game.”

Looking at the overall season statistics, the Rebels should have won by a lot more, but Hendrickson said they are still dealing with two players, Hannah Goemann and Tara Bauman, being out on injury.

“We’re real short on our depth right now, but a win’s a win,” Hendrickson said. “It wasn’t the prettiest, but we’ll take every one we can get.”

USC scored six more points before the end of the first while the Cobras scored nine for a halftime score 25-18. 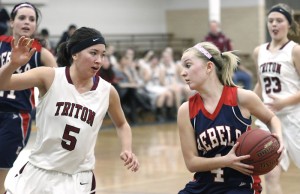 Brandi Hagen/Albert Lea Tribune Katie Ovrebo is blocked by Triton's Haley Staffon as she moves in toward the hoop on Thursday. Ovrebo led the Rebels with 21 points.

Just 1 1/2 minutes into the second, Triton’s Ashley Thaden made a 3-pointer leaving the Cobras down just four points. Over the next three minutes, Ovrebo scored five points and Allie Voigt scored two extending the Rebels lead to nine points.

Triton was at a stand-still while USC went on an 11-point run with 12 minutes remaining.

Eighteen points behind, the Cobras tried to make a comeback. With two minutes remaining, the Rebels were back to a 10-point lead. They finished the game with five free throws and a nine point lead.

The Rebels are at Blooming Prairie tonight at 7:30 p.m.