The funeral services for Vernon S. Thompson, of Albert Lea, formerly of New Richland, will be held at 10:30 a.m. Saturday at St. Peter Evangelical Lutheran Church in New Richland. The Rev. Scott Williams will officiate. Interment will be in Hartland Cemetery. Military honors will be accorded by New Richland veteran’s organizations. Visitation will be one hour before services at the church on Saturday. Friedrich Funeral Home is assisting the family with arrangements. 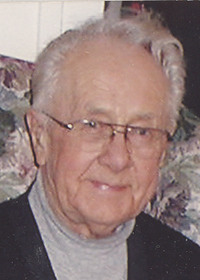 He was born on Jan. 30, 1918, in Hartland, the son of Arthur and Caroline (Sibilrud) Thompson. He attended rural country school and then proudly served the country. He served in the United States Army from March of 1942 until his honorable discharge in December of 1945. When Vernon returned from the war he attended Dunwoody Institute where he attained training in auto body repair. On May 21, 1950, Vernon married Bernice Kofstad in Hartland, they later made their home in New Richland. Vernon along with his brother, Harold, owned and operated Thompson Auto Body for more than 38 years before Vernon retired. He and brother Harold also owned a trailer park in New Richland. He was a member of St. Peter Evangelical Lutheran Church and had also been a member of the American Legion. He enjoyed fishing, hunting, camping with his family and loved lutefisk and lefsa.

Vernon will be fondly remembered for his kind, gentle, easy-going spirit.