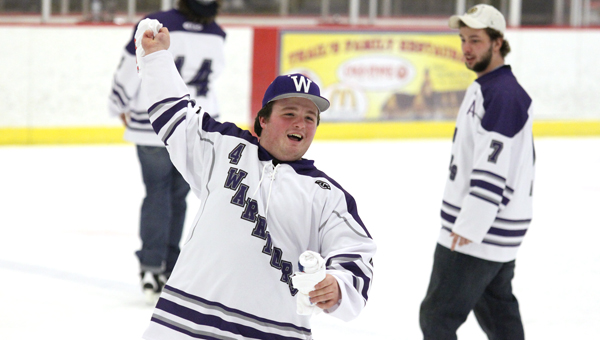 Kyle Olson, a player for Waldorf hockey, throws a T-shirt to the crowd during the Albert Lea boys' hockey game on Tuesday. This is Waldorf's first year as a hockey team.

The Waldorf hockey team signed autographs and tossed T-shirts to the crowd during the Albert Lea boys’ hockey game on Tuesday.

Roy Nystrom Arena housed the Warriors this winter as they played their first season as a hockey team.

“It’s been fun,” captain Josh Bevers said. “I think next year we’ll have more fans and hopefully more players because it gets tiring.”

During their time in Albert Lea, the team has spent Sundays helping the “Rink Rats”, one of Albert Lea’s youth hockey teams, learn how to skate.