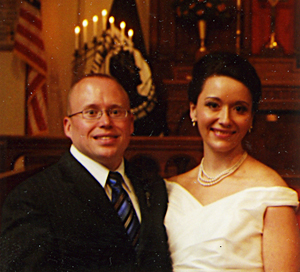 Parents of the bride are Arland and Judith Papenfuss, of Cottage Grove. Parents of the groom are Roger and LeAnn Knutson, of Albert Lea.

Matron of honor was Sarah Dallum, friend of the bride, of Minneapolis. Best man was Jonathan Zabel, brother-in-law of the groom, of Eagan.

Janine is a 1997 graduate of Park High School, a 2001 graduate of St. Norbert College with a bachelor’s degree in psychology and a 2008 graduate of St. Cloud State University with a master’s degree in college counseling and student development. She is employed as associate director for Career Connections at St. Olaf College, Northfield.

Jeff is a 1997 graduate of Albert Lea High School and a 2001 graduate of St. Mary’s University, Winona, with a double major in public administration and business management, and a 2002 graduate of Alexandra Technical College with a degree in law enforcement. He is employed as a police officer with the City of Mankato.