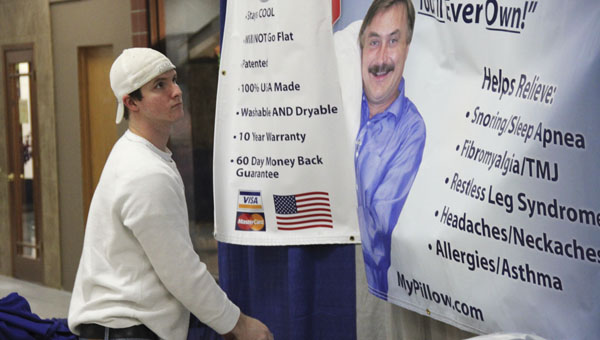 It’s a big weekend for Travis Renne. He traveled to Albert Lea from Carver to run a booth for the first time at a home and recreation show.

He is one of 50 vendors setting up their booths Thursday and Friday for the 31st annual KATE Radio Home & Recreation Show. The show is at Skyline Plaza this year. 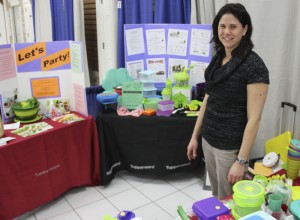 Andrea Evelsizer of Clear Lake stands next to her Tupperware products, which she is showing this weekend at the KATE Radio Home & Recreation Show.

Renne said the pillow won’t go flat and provides firmer neck support. On Friday, he was setting up his booth and said the company sent him to the show to see if that will help the company reach customers. Normally, he works in the production area where the pillow is made. The pillow has received media attention, including from the Minneapolis Star-Tribune.

“We’ve been getting really busy lately.”

“It’s always been a high-traffic show,” he said.

That’s probably because it is one of the earlier ones in the region, he said. The unseasonably warm weather this winter likely has people wanting to get to their home and garden projects even sooner than most years.

Andrea Evelsizer of Clear Lake is giving the KATE Radio Home & Recreation Show a try for the first time. On Friday, she was setting up her Tupperware products. It will be her first home show.

She said Tupperware has been around for 65 years — it famously invented in-home marketing with its Tupperware parties — but the products today are more than plastic bowls with lids.

Evelsizer showed microfiber towels, cookware, kitchen gadgets and stainless steel knives. She said the refrigerator containers keep fruits and vegetables two or three times longer than just placing the food in the produce drawer. She said the typical family throws away $450 to $500 of produce a year.

“These are my favorite products,” she said.

She also plans to show Tupperware goods at Mason City Women’s Day Out in April and the Earth Day Expo in Clear Lake that same month.

Larry Jensen of Albert Lea is an installer for Granicrete Minnesota. On Friday, he was installing Granicrete floor samples into his exhibition booth.

He said the show is good exposure for the product, which received good responses in past years at the show. Granicrete replicates the look of stone, tile and wood and can be used for floors, counters, walls, patios and other uses around a typical home.