Albert Lea’s high school band is celebrating its 100-year anniversary this school year after it was started in 1912 by Lee Prentice. 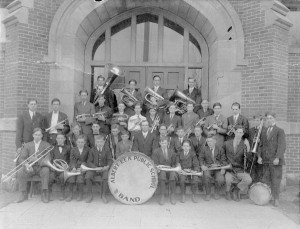 This photo of what is considered to be Minnesota’s first high school band was likely taken in the spring of 1913. The band had been organized by Lee Prentice in the fall of 1912 and evidently also included boys from the seventh and eighth grades. Prentice appears to be the man directly behind the big bass drum. -- Photo courtesy Freeborn County Historical Museum

The band is also special because it was Minnesota’s first official high school band. In 1990, the Minnesota Historical Society confirmed this claim that no other high school band was operating in the state prior to the fall of 1912.

There may have been informal music groups throughout the state, but when the Albert Lea school board appropriated $100 to the first band director, Prentice, it was made official that Albert Lea had the first band. With that $100, Prentice purchased two bass horns, a bass drum and a baritone; many other students played cornet or snare drum.

Prentice started out with 35 boys who didn’t know how to play instruments, but by the spring of 2013 the band held its first concert. The first female student to join the band was in 1925.

Prentice was later killed in action in late 1918 while serving as an aviator with the U.S. Army in France during World War I. Fairmont’s American Legion, Lee Prentice Post 36, is named for him. His name was perpetuated in Albert Lea with Prentice Avenue, a short street south of Front Street. That street was later eliminated when Lou-Rich expanded. The street sign with Prentice’s name is now at the Freeborn County Historical Museum. 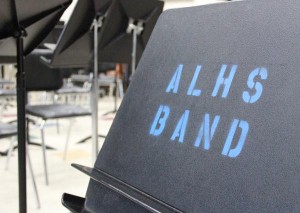 The Albert Lea band program has grown over the years from 35 members in 2012 to three full bands, two jazz bands and a drumline in 2012. -- Kelli Lageson/Albert Lea Tribune

Suzanne Mauer is the current director of bands at Albert Lea High School. Now there are three bands, Tiger Band, Symphonic Band and Concert Band made up of eighth- through 12th-graders. Students also perform pep band duties, can compete with others in the state for Honor Band and solo/ensemble events and have the option of participating in one of two jazz bands or the drumline.

She noted that music education is changing, but will always be important. She said music, either listening to it or making it, is important to most high school students.

Mauer said the bands this year did Russian Christmas music and are working on “Chorale and Shaker Dance” by a Minneapolis composer, John Zdechlik. Mauer said she likes to have a variety of difficulties of music so the bands can be challenged.