A storyteller writes his novel

An Albert Lea man has written a book set in Michigan’s Upper Peninsula with characters he thinks anyone can relate to. 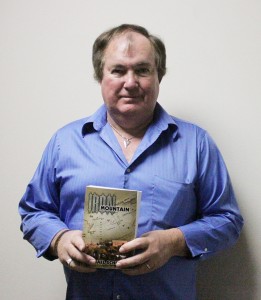 Michael Shoepf has lived in Albert Lea for 18 years but also lived in Michigan, which is how he was able to describe the setting of the novel. He said it’s more about the characters who are inadvertently involved in drug trafficking in the fiction novel titled “Iron Mountain.”

“It’s the story of ordinary people who are pursuing the American dream and are thrust into extraordinary circumstances,” Shoepf said.

Shoepf said the novel has action and mystery and is about four people who have to deal with life-altering situations.

Shoepf said friends and family had been telling him for a long time that he was a good storyteller and should write a book. His first attempts following what he learned in creative writing classes didn’t pan out, and he finally just sat down and started writing like he was telling a story.

“I thought ‘Hey, this is really starting to come together,’” Shoepf said. “What worked was to tell a story.”

Shoepf, a teacher at the group home in Hayward, said he loves his job but wanted to challenge himself by writing this novel. His wife, Beverly, and children Tony, 21, and Maria, 22, helped him out by supporting him in many ways through the publishing process. He said Creative Space, the self-publishing company he used, was helpful every step of the way as well.

“I had a lot of fun doing this,” Shoepf said. “It’s something I wanted to do to prove to myself.”