HOLLANDALE — Landon Uthke is a busy 4-year-old nowadays. He runs around, does puzzles, plays games and is excited to start pre-school in the fall. 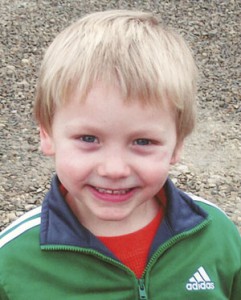 In fact, he’s such a normal toddler that no one would notice Landon is missing a limb.

Landon’s left leg was amputated above the knee in October after a lawn tractor accident injured the then-3-year-old at their Hollandale home. Landon’s father, Kevin, accidentally backed over his son with a riding lawn mower while doing lawn work, injuring his leg and torso.

“It’s been amazing,” Petra Uthke, Landon’s mother, said. “The outpouring of support has just been amazing.”

Thrivent Financial workers have helped organize the benefit, gathering hundreds of items for a silent auction and helping to spread the word about Landon.

“When something happens to a little boy like that, somebody’s got to do something about it,” Martha Vrieze Morrison, of Thrivent Financial said.

Landon is getting plenty of help at home, too. Petra said Landon’s 10-year-old brother, Coltan, and 9-year-old sister, Katelyn, have been very supportive of Landon while he adjusts to a prosthetic limb.

“They’ve been doing really good,” she said. “Of course it was tough at first, but they’ve really stepped up and helped out, any time he needs it.”

Landon may have lost part of his leg, but he hasn’t lost his youthful energy, according to Petra.

“He’s a very active little boy,” she said with a laugh.