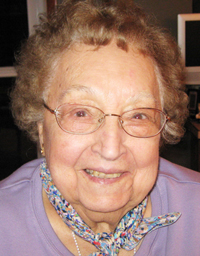 Bessie moved to Dubuque, Iowa, in 1945 and lived there until June of 2008 when she moved to Albert Lea. She married Clarence J. “Chick” Bowen on Aug. 16, 1945, in Baton Rouge, La. He preceded her in death on Aug. 24, 1976. She later married Philip V. Schwinn on Sept. 17, 1977. He also preceded her in death on Oct. 16, 2000. Bessie could always be found in her kitchen cooking and entertaining her many friends with homemade goodies. She dearly loved her family and made a new family of friends at Thorne Crest. Bessie was a member of St. Theodore’s Catholic Church in Albert Lea and a member of St. Anthony’s Catholic Church in Dubuque, Iowa. She was also a member of Holy Family Catholic Mothers Study Club, St. Anthony’s Rosary Society and the Pegs and Jokers Club at Thorne Crest.

In lieu of flowers a Bessie M. Schwinn memorial fund has been established.

Online condolences may be left for the family at www.behrfuneralhome.com.