Beverly Ann Swenson, 80, of Wells, died Tuesday, March 20, 2012, after a short battle with cancer at Thorne-Crest Retirement Community in Albert Lea surrounded by her five daughters who truly thought the world of her. A mass of Christian burial will be at 10:30 a.m. Saturday at St. Casimir Catholic Church in Wells. Visitation will be from 4 to 7 p.m. Friday at Bruss-Heitner Funeral Home in Wells, and will continue one hour prior to the service at the church on Saturday. The Rev. Eugene Stenzel will officiate and burial will take place in St. Casimir Cemetery in Wells. Bruss-Heitner Funeral Home in Wells is assisting the family with arrangements. 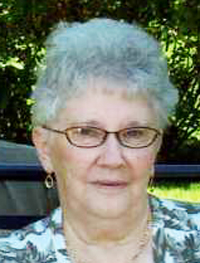 Beverly Ann Swenson was born Sept. 9, 1931, the daughter of Henry and Mabel (Pfahning) Schneider in Albert Lea. She was baptized and confirmed at Mansfield Lutheran Church. She attended and graduated from Alden High School, the class of 1949. On June 27, 1951, Beverly was united in marriage to Donald “Jack” Swenson at Mansfield Lutheran Church. The couple farmed in the Wells area until moving into Wells in 1980. She was a long-time, faithful member of St. Casimir Catholic Church in Wells. Beverly loved her whole family and so enjoyed family gatherings and holidays. She also treasured her many special friends.

She was preceded in death by her husband Donald “Jack” on March 19, 2011; her parents; her mother-in-law and father-in-law: Alfred and Hattie Swenson; brothers-in-law: Arnold and Joe; sisters-in-law: Alice and Dorothy.