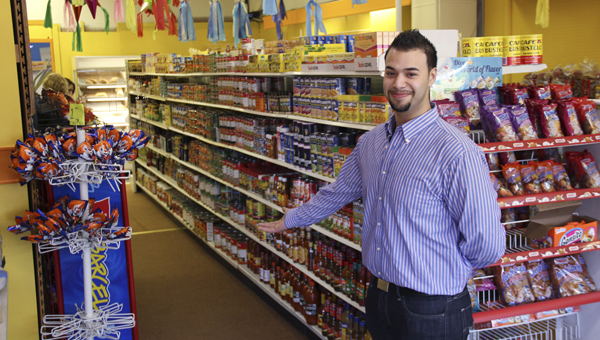 One of Albert Lea’s young entrepreneurs has begun a new quest in the heart of the city.

But the store, El Torrito, doesn’t just offer Mexican grocery items. It offers a little something for everyone, said his aunt, Maria Rodriguez. 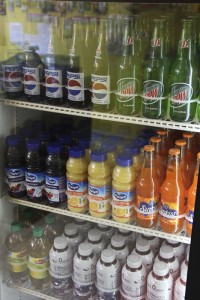 There is a place to buy a bottle of pop once again in downtown Albert Lea. Kids from Youth for Christ's The Rock on Clark Street like to come over to El Torrito on Broadway Avenue and get pop. This is one cooler of three at the store. -- Tim Engstrom/Albert Lea Tribune

In addition to “everything you need to make good tamales,” Maria said, there’s scores of Mexican spices, tortillas and other products, Puerto Rican food, a fresh bakery, candy and fresh vegetables. Piñatas are hung from the ceiling.

In about a week there will be fresh cut meats, and eventually they hope to have a deli.

“We think the meat will give us a good result,” said Maria, who helps out when Miguel is not around.

The store will also have products from Cuba and Thailand, she said.

Miguel, 21, said though he did not necessarily plan to have his business downtown — it happened to be available — he is pleased with the success he’s seen thus far.

The site is the former location of the Story Lady Doll & Toy Museum.

People who are walking around the downtown have stopped in to check it out, Maria said. Each afternoon, there’s children who come in from around the corner at Youth for Christ’s The Rock for candy or soda. At other times there’s people coming in from the American Legion post across the street. Others alike come from Mayo Clinic Health System in Albert Lea.

“There’s a lot of people from around here,” she said.

The aunt and nephew said there have also been people in from Iowa, and they have been told by others who live in trailers on the south end of town that they will go past the other two Mexican stores on Broadway just to come to the new store.

Maria said she anticipates the Albert Lea Farmers Market to be positive exposure as well.

The family moved to Albert Lea about four years ago from the Twin Cities, where they had owned a Western store. They wanted to try something new.

The Broadway Avenue location was open, so they installed new carpet and tiles and painted the walls to get the location ready for business.

Maria and Miguel said they think having the business downtown will give more exposure of Latinos to non-Latinos in the community.

In addition to his responsibilities at the store, Miguel is also the owner of Lago’s Auto Repair on South Broadway Avenue.

He aid he and his mother plan to open a Mexican restaurant on Clark Street in the former Blondie’s location in the next three months.