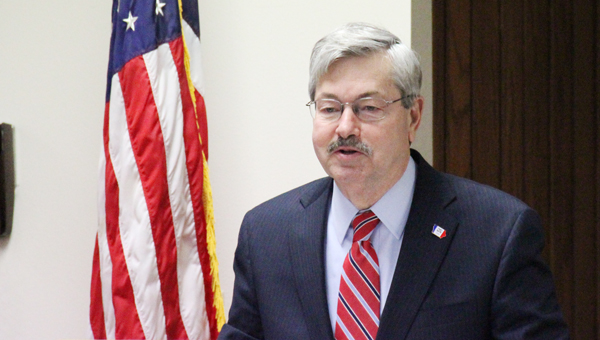 Iowa Gov. Terry Branstad speaks to a crowd of about 75 people on Wednesday in Lake Mills. -- Danielle Boss/Albert Lea Tribune

LAKE MILLS, Iowa — Iowa’s governor and lieutenant governor on Wednesday brought their plan of property tax relief to this community, calling it a proposal that could improve the economy and bring more jobs to the state. 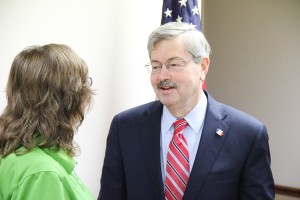 “Everybody knows our property taxes are too high and something needs to be done,” said Gov. Terry Branstad, R-Boone, to a full-house crowd of about 75 people at the Lake Mills City Hall.

He said if the Legislature did not take any action on a property tax relief bill, there would be a $2 billion increase in property taxes over the next eight years.

“It’s unaffordable for Iowa citizens, and we need to continue to fight for a solution,” Branstad said of the current tax system. 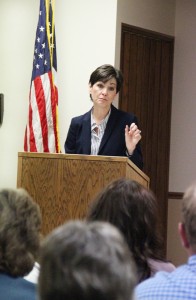 Branstad, 65, is from Winnebago County. He graduated from Forest City High School in 1965 and worked as a lawyer in Lake Mills when he first ran for state representative in 1973. He was governor of Iowa for 16 years starting in 1981.

He said his and the Lt. Gov. Kim Reynolds’ plan would save residential taxpayers $606 million; commercial, industrial and railroad taxpayers $347 million; and agricultural taxpayers $226 million.

It would rollback commercial property taxes by 5 percent each year during the next eight years, hopefully helping to make the state more competitive with neighboring states and even other countries.

Because commercial property taxes would decrease, this would in turn reduce tax revenue to local governments in cities with little or no growth. He said his plan has also outlined state general fund money to help cities with this reduction. 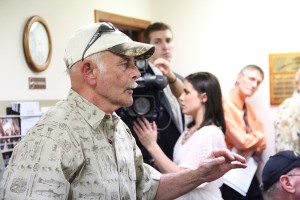 The proposal has been approved by the Republican-controlled Iowa House of Representatives and has moved onto the Senate, where Branstad said he’s ready to make a few compromises if needed. The Senate is controlled by Democrats.

He said Democrats are calling for an increase in the earned income tax credit for working, low-income residents, and he’s willing to agree to this, if the Democrats approve the commercial tax changes.

Reynolds, who worked as treasurer in Clark County, Iowa, said she heard firsthand the business owners who were concerned about their property taxes. 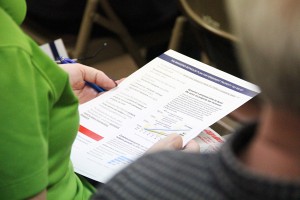 Citizens attending the meeting were given a sheet with information on the property tax relief bill.

“I believe we’re closer than ever to a permanent solution,” she said.

Branstad and Reynolds said they think the plan would give business owners confidence they need to expand or come to the state.

The proposal would limit residential tax growth to 2 percent a year.