Cantori can sing it 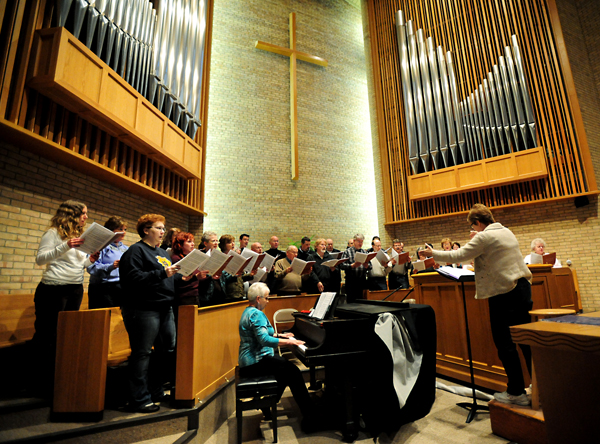 The Albert Lea Cantori practices on Monday at United Methodist Church. The Cantori will have a concert on April 29 at 3 p.m. to celebrate its 40th anniversary. --Brandi Hagen/Albert Lea Tribune

Well, a song by his name anyway.

To celebrate the beginning of its 40th year, the Albert Lea Cantori will hold a concert April 29 at United Methodist Church with a reception to follow.

They will sing 14 pieces, including one in which current and past members perform together. The theme of the concert is “American composers.” All of the pieces that will be performed were created by American composers with the exception of a piece called, “William Shakespeare.” 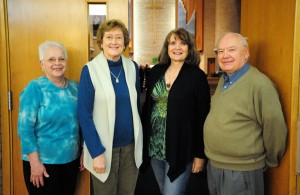 The composer of “William Shakespeare,” Sebastian Modarelli, is from Argentina, but he lives in Rochester and works as a director of music at the Church of St. John the Evangelist.

The Cantori was founded in 1972 by Gene Janssen and James Melby. Over the years the Cantori has had a total of 160 members and currently has 36 members singing.

Four members: Dennis Johnson, Sue Jorgensen, Julia Tonder and Gail Thurnau have been members of the group since day one.

Jorgensen said over the years the members have become close friends.

“For the first few years we came, we rehearsed, we sang and we left,” Jorgensen said. “When Eileen started, she made sure we introduced ourselves to each other and we got to know the other people.”

Another change to the group that Ness made was to the group’s attire. Jorgensen said it has become a more professional uniform attire.

“That way we don’t distract from the music,” Johnson said.

Besides their Christmas and spring concerts, the Cantori has sung for both weddings and funerals and as guest performers at Halloween and Fourth of July concerts.

They have sang in many languages including: Porteguese, Latin, German, French, Norweigan, Swedish and English.

Their Monday night practices are taken seriously with time to socialize only after the work is done, Johnson said. If a member misses a night, they are faced with the consequence of bringing treats to share during the social time.

The choir members are looking forward to performing both the commissioned piece and also a double choir piece in April.

• “With a Voice of Singing” by Kenneth Jennings
• “Give Me Jesus” by L. L. Fleming
• “Ye Were Sometimes Darkness” by Randall Thompson
• “Crossing the Bar” by Gwyneth Walker
• “William Shakespeare” by Sebastian Modarelli
• “Hark, I Hear the Harps Eternal” by Alice Parker
• “I Carry Your Heart with Me” by David Dickau
• “Amor De Mi Alma” by Z. Randall Stroope
• “Dorma, Ador” by Aaron Jay Kernis
• “Think on Me” by James Quitman Mulholland
• “Sing Me to Heaven” by Daniel Gawthrop
• “The Road Home” by Stephen Paulus
• “Beautiful Savior” by F. Melius Christiansen
• “Rockin’ Jerusalem” by Andre J. Thomas