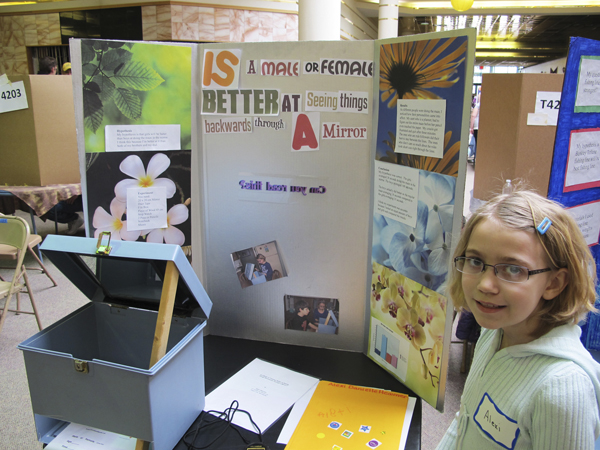 By Sara Aeikens, for the Tribune

Which pepper is the hottest? That was the subject of the science project fifth-graders Juan Rodriquez and Christian Garcia showed Saturday at Northbridge Mall. 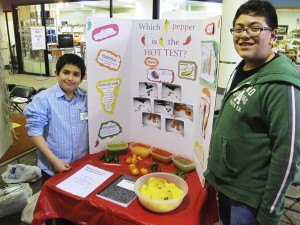 Fifth-graders Juan Rodriquez, left, and Christian Garcia on Saturday showed which pepper is the hottest at the science fair at Northbridge Mall.

The Habanero pepper proved the hottest of the ones they tasted.

Rodriquez enjoyed learning about what makes it hot inside a pepper and enjoyed tasting the salsas they made.

“My mom’s the one who actually did the salsa cooking, but I told her what to put in it,” he said.

He said he enjoyed working on a project with Garcia. “We did this fabulous experiment, and we did our best.”

About 320 students in third- through sixth-grades showed off their mental and creative skills Saturday at the annual Northbridge Mall Science Fair, held by Albert Lea Area Schools and St. Theodore Catholic School.

The guidelines for project entries required following scientific inquiry and had to be experiments, rather than demonstrations. Project areas include botany, consumer product testing, earth and space science, engineering, technology and math, environmental science, medicine and health, physical science and zoology and humans.

So how did Rodriquez and Garcia pick their project? 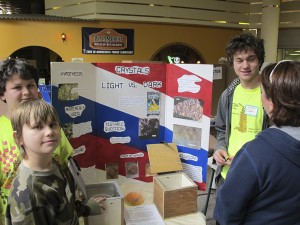 Fifth-grader Tanner Darbo, left front, stands with family members Saturday by his science project, which showed how crystals become light or dark. Behind him is brother Stone. On the right is his mother, Susan. Speaking with her is brother Forrest.

“My aunt helped us,” Garcia said, “because we were looking through the science fair handbook and couldn’t find anything we were really interested in, and she said, ‘Hey, why don’t you try your project with peppers?’

Erin Johnson, a sixth-grade teacher at Southwest Middle School, took on the role of science fair coordinator “because these are kids who want to be scientists, and they are choosing to take a whole Saturday to do this,” she said.

It was her first year being a coordinator of the annual fair, and she said she did it because it was a job that needed to be done.

The other two coordinators were Southwest Middle School science teacher Jackie Cromwell-Olson and Sonya Zieske, the coordinator of gifted-and-talented development. Johnson gave credit, too, to Heidi Skophammer at the district office for her assistance.

“Developmentally, it is difficult for kids this age to complete multi-step projects. So for a student to take on a project like this is amazing,” Johnson said. “Without the parents and caretakers, it could be difficult for them to complete this in time.”

Recently retired from the school district, Judy Knutson once worked with numerous science fair coordinators. This year, she volunteered to be one of the many judges.

“My children participated in the science fair when they were children,” Knutson said. “Many, parents, teachers, children and community members volunteer their time in many ways, so it’s really a community event.”

Coni Tuberty, a Daybreakers Kiwanis Club member, sees judging for the science fair as a part of the club’s mission to serve children globally. Tuberty has judged for four years and has grandchildren doing science projects.

“Last year some of the students got to be judges,” Tuberty said. “The range of abilities stands out and doesn’t seem to do with just the age category.”

Sixth-graders Spencer Chicos and Calvin Petersen built bridges out of popsicle sticks to test what types of bridges holds the most weight.

Amy Petersen, Calvin’s mother, said, “I asked the boys what some real-world applications were for their projects, and they were able to come up with some good ideas.”

The Bera family of Hayward gets good ideas from their elders.

“My grandpa told me he could light a lamp with a vegetable or a good kiwi fruit,” fifth-grader Rachel Bera said.

She showed that both fruits and vegetables produce current. The sweet potato turned out to be the highest producer.

Tanner Darbo, also a fifth-grader and part of the extended Bera family, said his grandfather has a big rock collection. They went panning for gold in South Dakota and found gold flakes. He did his project on rock crystals, showing light and dark.

“To make the crystals, we got a citrine packet at Hobby Lobby in Rochester,” he said.

Another fifth-grader, Dane Brownlow, wondered if dogs had more bacteria in their mouths than humans. He found out that they did and received a trophy for his efforts.

Brownlow said, “It was just a really fun project. It took a long time to grow the dog ones. Human bacteria don’t take as long. My dad helped me hold my dog when I swabbed her, and my mom helped me type up the paper.”

Third-grader Jarrett Flink experimented to see how much carbon dioxide would burst a balloon. He found that the more baking soda and vinegar he added to the balloon mixture, the more it expanded.

“I had a lot of fun,” Flink said. “I am interested in astronauts. We are all astronauts on a spaceship right now. Planet Earth is moving around.”

Kelly Flink, Jarrett’s mother, said her husband helped a lot to assure her kitchen wouldn’t be destroyed, but then they discovered they needed a bigger bottle for the project. As a family they plan to continue the experiment this spring, outside the house, with a larger bottle.

Out of four kinds of light bulbs she tested, third-grader Savannah Quinlivan, found LED bulbs are, in fact, most efficient.

“I wanted to choose something, but I kind of decided at the last minute. My dad does electric sales, so he helped me along the way. The best part was getting it done and seeing how much I accomplished,” Quinlivan said.

Fifth-grader Cole Wentzel concluded a toddler is most attracted to a ball that is the color blue and that is also the favorite color of choice for all ages.

Third-grader Lucy Sherman was interested in composting and wanted to know which fruit would decompose the fastest. Pears do.

A special touch appeared on the back side of the display board made by Kayla Citsay and Brooke Talamantes. They used the entire space to draw in color the face of a girl with acne, complete with rope hair. The fifth-graders tested what works best on acne.

The project Lorayna Telles chose was about using bio-remediation to clean up crude oil spills.

“My mom was saying stuff about picking a project that had to do with algae,” the fifth-grader said.

In a letter to local donors, Zieske shared the benefits of the science projects.

“Science fairs,” she wrote, “encourage students to think critically, research intensely, incorporate math, write concisely and communicate effectively. Because this project involves an extended period of time to complete, long-range planning and time-management skills are also reinforced. These are critical skills required of all students into adulthood, regardless of their chosen career.”