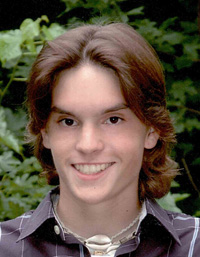 Daniel Michael Berg was born June 24, 1987, to Michael B. and Mary (Hagen) Berg in Rochester. He graduated from Century High School in 2005. Daniel attended RCTC and College of St. Scholastica, Duluth. He worked many years at Subway. As a youth Daniel volunteered at Crosswinds church in children’s ministry and participated in a mission trip to the Dominican Republic. His favorite adventures were joining a dinosaur dig in Wyoming and kayaking to the Apostle Islands. He was an artist who enjoyed drawing with charcoal, playing piano, snowboarding, camping and all water sports. At the time of his death, Daniel’s final wish was fulfilled through organ donation.

Daniel is survived by his parents, Michael and Mary Berg of Rochester; his two sisters: Kelly and Madalyn Berg, both of Rochester; his maternal grandfather, Dean Hagen, Duluth; paternal grandparents, Robert and Laurie Berg of Austin; his uncles and aunts: Richard and Sharon Kreis, Jane Hagen, Robert and Ann Commodore, John and Annie Hagen, Tom and Bev Hagen, Dale and Jan Thorn, LuAnn Kasak and James Berg; and many cousins. Daniel was preceded in death by his grandmother, Virginia Hagen.

A memorial service will be held at 11 a.m. Wednesday at Crosswinds Church, 8106 31st Ave N.W., Oronoco. Visitation will be from 4 to 7 p.m. Tuesday at Ranfranz and Vine Funeral Home and one hour before the service at the church. A private family burial will be held at a later date. In lieu of flowers, memorials are suggested to Mayo Eugenio Litta Children’s Hospital, Mayo Clinic, Rochester or Channel One. Ranfranz and Vine Funeral Homes in Rochester is in charge of arrangements.