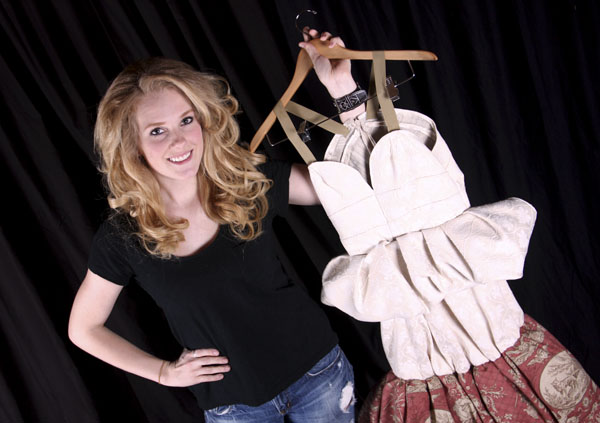 Nicole Larson, a 2007 graduate of Albert Lea High School, holds up one of her most recent designs, a Victorian dress she created this winter while in fashion school at the College of Visual Arts in St. Paul. -- Brandi Hagen/Albert Lea Tribune

Nicole Larson wanted to be a photographer. After graduating from Albert Lea High School in 2007, Larson attended the College of Visual Arts, a private art school in St. Paul.

But like many college students, she changed her major once she was there.

“I realized it wasn’t the photos that I loved,” Larson said. “It was the photos of fashion in magazines.”

Larson was in luck. The school was just starting to offer a fashion program, and she became the first student to major in it. 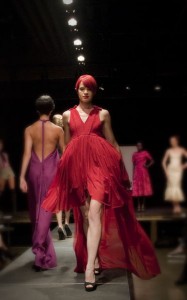 This dress is one that Nicole Larson designed in 2011 for Minnesota Fashion Week. -- Submitted photo

As part of her degree, her junior year Larson traveled to Paris for eight months to be a student at Parsons Paris School of Art and Design.

It was something Larson was really excited to do, but she had to overcome being dependent on her parents and boyfriend to make the trip alone.

“I made it happen,” Larson said. “If you don’t take any chances, nothing will happen.”

Larson was trained in fashion design but said her work has been costumed-based and theatrical.

“I like telling more of a story to somebody than mass production of selling clothes,” Larson said. “There’s a big difference for me. I like the sort of individualized one-of-a-kind garment, opposed to something sold at Target for thousands and thousands of people.”

While in school, Larson participated in three major shows. One was a solo show for her senior thesis. The other two were for Minnesota Fashion Week and were called The Little Black Dress Event and The Emerging Designer.

For shows, professional models show off Larson’s work. She said it can be difficult because she doesn’t pick the model and so she isn’t always sure on the size she should be designing for.

“When I got them on the models for the show and they fit, it was a sigh of relief,” Larson said. “When you’re working on a dress for so long in your studio, it gets really worrisome.”

When a piece isn’t for a show, Larson photographs and models her pieces herself or has a friend model for her because it saves on costs.

“If you have those abilities, you might as well use them,” Larson said.

Now that she has graduated, she is working on building up her portfolio. Larson said she is more of an on paper designer than one who actually sews a piece.

Larson has sewn together about 15 of the pieces she has drawn. She said she doesn’t mind sewing and it’s important to know how to do because then she knows how the designs will form on a body.

“When I was little, my mom had me in 4-H and she had me try to sew clothing,” Larson said. “I was so young I hated it. I had no interest in clothing or fashion. I didn’t care what I looked like or how I dressed for the longest time. It’s pretty funny how it changed.”

Larson said she always knew she would be an artist of some sort.

“Math class, FACS class, I was terrible. It didn’t click for me,” Larson said. “It was a different way of thinking.”

She said it was especially hard being the only artist in her family and having an older brother who did well academically.

Larson said her parents were worried when she switched from photography to fashion because everyone needs a photo taken at some point.

“They’ve grown on the idea,” Larson said. “Even though I’m sure they don’t quite understand the whole realm of that world, they want to.”

Larson is hoping to move to Los Angeles by mid-summer to start designing costumes for films.

“I’m really ready for it,” Larson said. “I loved growing up in Minnesota and I like the seasons, I think they’re really beautiful. I’m just ready for something new and I’m not planning on living in L.A. forever, I think it’s just a great place to start.”

Larson said L.A. would be an ideal place to start because her favorite thing to design is superhero costumes. That would be possible in L.A. because it is a place where films are produced versus Minneapolis where her designs would have to be more theater based.

“The costume is so much who the character is,” Larson said. “Imagine Spiderman without his suit. He wouldn’t be Spiderman.”

There is a part in the movie where Captain America bursts through the doors in a new costume.

“It was like a big epic explosion because he has his new costume on. It’s like he’s become his full character,” Larson said. “It’s moments like that where it’s like, wow. I want to be a part of remembering a character like that.”