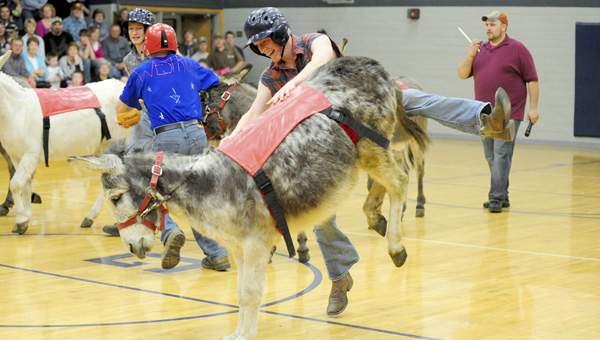 Brandi Hagen/Albert Lea Tribune Spencer Wangen, a rider for the Rednek team, is bucked off his donkey before he could even get on.

GLENVILLE — March Madness continued at Glenville-Emmons High School on Thursday as riders saddled up and rubber shoes were attached to the hooves of donkeys in preparation for a night of basketball.

“It’s fun to do,” Trent Thoms, a Glenville-Emmons student, said. “Coming from a small town, everyone knows who it is and if you fall down they like to be able to laugh at you and like to watch you try hard and not get anywhere.” 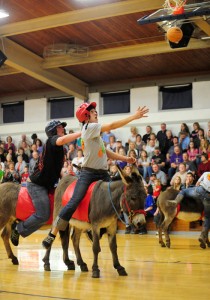 The crowd roared with laughter as donkeys broke into a run and came to a quick halt which sent their riders flying face first over the donkeys’ head.

As entertaining as it already was, the referee, John Wendlandt, a Dairyland Donkey Ball employee, made calls as he saw fit.

“People pay for a show, and when I pay for something, I expect the best,” Wendlandt said. “I try to give them a good show and make it worthwhile. … So when I called that young man for double-dribble, it’s mainly to keep the score close so it’s entertaining for the crowd,” Wendlandt said.

There were basic rules to the game, such as having to be on a donkey to pass, steal or shoot.

Other regulation basketball rules went out the window as Wendlandt made calls at his own discretion.

“I definitely cheat out there,” Wendlandt said. “It’s fine. Even if the crowd is booing me, it still gets a rise out of them. It’s all a part of entertaining.”

During the third round, Wendlandt made a deal with Bennett Stadheim, a member of the Albert Lea FFA chapter, that if he could make a basket while riding his bucking donkey, he would get double the points.

The crowd erupted in applause.

“Bennett,” Wendlandt said. “I think your mom cheered the loudest.”

The Glenville FFA Redneks came out victorious with a two-point lead, but none of the teams really cared about the score; they were too busy putting on a comedy show for the audience.

The sanitation crew, Dalton Nesset and Alec Madson got off easy only having to do their job once.