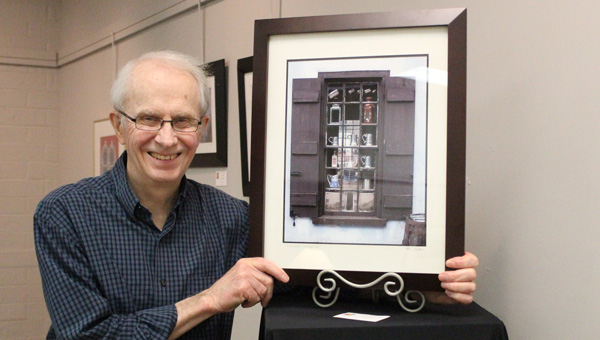 Tom Mullen poses with one of his creations which are on display at the Albert Lea Art Center for its “Art as Seen Through Doors and Windows” show going on now. -- Kelli Lageson/Albert Lea Tribune

The latest show at the Albert Lea Art Center features a variety of photographs by a retired educator.

Tom Mullen is showing many of his photographs from over the years, but only the ones that fit the theme of “Art as Seen Through Doors and Windows.” He’s a member of the center and its board, but anyone could show their work. 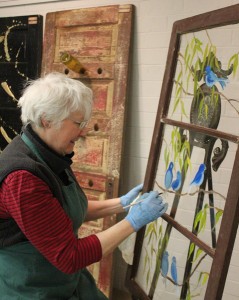 Ann Oliphant works on a creation at the Albert Lea Art Center. The center is open 10 a.m. to 2 p.m. Tuesday through Saturday each week.

“Every show is open for anyone to participate,” Mullen said. “The art center is always very encouraging to anyone who wants to display.”

While he doesn’t consider himself an artist, he said the art center is for those who are interested in art. Mullen said photography is his hobby, and he always takes a camera when he travels. While he likes to photograph landscapes, he also had many photos that fit the theme of doors and windows.

“I dug through my archives to find ones that fit the show,” Mullen said.

Some of the photos in the show were taken near Albert Lea and some were taken as far away as Kentucky and England. He uses a Canon XTi, and said that while he’d like to upgrade someday, he is used to this camera and how it works.

Mullen doesn’t do a lot of photography in the winter months and said it’s usually pretty dreary out unless there’s new snow. He prefers to work when the seasons are changing or during spring.

“When spring comes I get fired up again,” Mullen said.

Retirement has helped Mullen with his hobby, as he’s able to spend more time wandering around and noticing things.

“It makes a difference when you can spend more time places,” Mullen said.

A new feature during this show is that artists will be hand-painting windows during the show. There will be a silent auction for the two windows before a concert March 30.

The concert is part of an evening of music for the arts, presented by the art center at the Marion Ross Performing Arts Center from 7 to 9 p.m. The featured musical group is five-member group Three Wheels and a Flat, who play country, bluegrass, church, folk, soft rock and more. Opening for the band will be Angie Johnston and Sonjia Hill, known as Johnston Hill, two Albert Lea residents who recently released a Christmas album.

Tickets for the event are $12 and are available at the Albert Lea Art Center, Addie’s Floral & Gifts and Ben’s Floral & Frame Designs. Refreshments will be served; for more information call the art center at 373-5665.