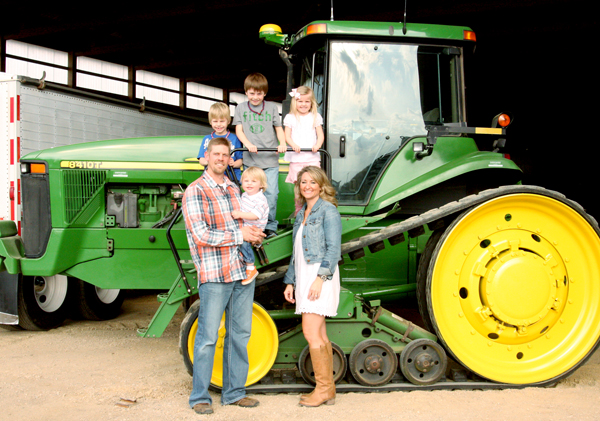 The family of Andrew and Jody Bakken was chosen as the 2012 Farm Family of the Year. They have four children: Brennan, 8, Blaine, 6, Brielle, 3, and Bryant, 1. -- Brandi Hagen/Albert Lea Tribune

Andy Bakken is the fifth-generation in his family to work on the farm and has spent the last 13 years doing so. Bakken and his wife, Jody, have used the farm as an opportunity to teach their four children responsibility and the difference between right and wrong.

The family was named Farm Family of the Year today at a luncheon at the Freeborn County Fairgrounds.

Both Andy and Jody feel honored to be nominated, especially since they consider themselves young farmers.

The Bakkens grow corn, soybeans and alfalfa, have 35 head of cattle and run a hog operation from their farm.

“A diversified family farm like we’ve got, they’re far and few between anymore,” Andy said. “Most everything is strictly crops or they’re a contract finisher when they just feed the animals for a company.”

The farm is so big the Bakkens have hired two guys on top of getting help from both of their fathers and Andy’s uncle and cousin.

“My goal is to be successful as a family,” Andy said. “And I don’t mean just Jody and me.”

Andy said starting up a farm is nearly impossible these days with the costs it takes to run a farm and also because farming has changed over the years, so it makes him feel good to be able to carry on the family tradition.

One of the Bakkens’ favorite parts of having the farm is hosting farm tours for United Preschool and when Albert Lea-Freeborn County Chamber of Commerce takes third-grade classes to farms.

They said it’s something their children really enjoy too because they get to teach their classmates about farm life.

“I love it. It’s just not something you do every day,” Jody said. “Our kids want to tell everything.”

The Bakkens hope someday their kids will want to take over the farm.

But they want them to first go to school and get a degree like they both did so they have something to fall back on if something were to happen with farming.