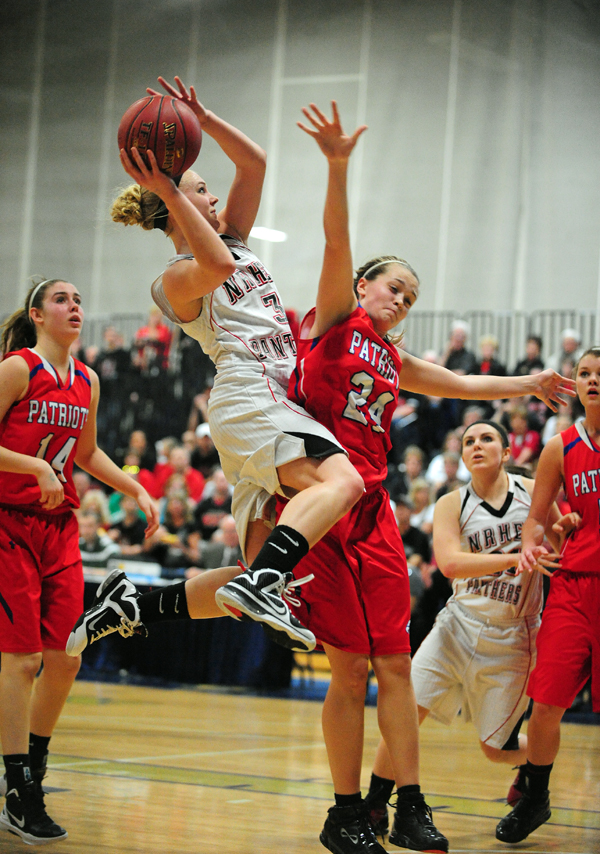 New Richland-Hartland-Ellendale-Geneva's Carlie Wagner rises for a layup on Saturday during the Class 2A third-place game at the Gangelhoff Center at Concordia University in St. Paul. Wagner set two state tournament scoring records in the 71-61 win, including most points in a game (48) and three-game total (112). -- Andrew Dyrdal 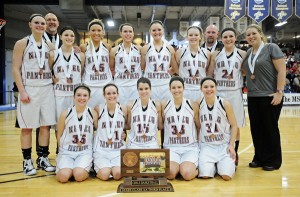 The New Richland-Hartland-Ellendale-Geneva girls’ basketball team poses for a photo with its third-place medals and plaque. The team finished the season 32-1.

Wagner shot an efficient 20 for 34 and made two free throws with seven seconds remaining to tie and break the record of 47 points, previously held by Brittany Chambers of Jordan (2008) and Tayler Hill of Minneapolis South (2009).

The sophomore also set the tournament’s three-game scoring record with 112 points. She averaged 37.3 points per game en route to the third-place finish and ended the season with 956, the third-most in state history.

Wagner said she couldn’t believe what she was hearing.

“It was crazy,” said Wagner, who along with senior Anna Schlaak, was named to the Class 2A All-Tournament Team. “I’ll never forget that feeling.”

Wagner came close to the record on Wednesday when the sophomore scored 43 points in a 30-point rout of Braham in the quarterfinals. Wagner, along with her coach John Schultz, was unaware of the record and exited that game with 90 seconds left.

This time, Schultz made sure to give her a shot.

Sitting at 46 points after having scored 28 in the first half, Wagner remained in the game with one minute left while the rest of the starters were called to the bench.

She missed one layup attempt and was blocked on another before she was fouled in the backcourt with seven seconds left. Wagner looked calm as she knocked down both free throws in front of a roaring crowd.

The Panthers finished the season 32-1, and Wagner said she was pleased with the way her team bounced back after suffering its first and only loss of the year the night before to Sauk Centre in the semifinals.

“We really wanted to end the season on a win and go out with a bang,” said Wagner, who also notched seven steals and seven rebounds. “We knew we could either come in here with our heads down and mope about it or we could come in and play and get third place. We decided to work for it.”

The Panthers fell behind by eight points early in each of its first two tournament games but surged ahead of Pequot Lakes in its first game away from the Target Center. Wagner scored the Panthers’ first nine points and 21 of 25 but received help from her supporting cast, too. Schlaak scored 10 points, Jade Schultz had five in the first half and seventh-grader Maddie Wagner knocked down a 3-pointer with less than a minute to go as NRHEG went ahead 40-25 at the break.

“We bounced back and now that will help erase last night’s defeat,” Schultz said. “That was tough on us, but this will help make it better.”

After having reached the state tournament for the first time since 2004, Wagner said finishing third and a win shy of the finals makes the Panthers motivated for next season.

“We really want to get back here again because we had so much fun,” she said.

The win over Pequot Lakes was the final game for three seniors, including Tori Raimann, Danielle Krueger and Schlaak. The team will return three starters next season, including Wagner, Schultz and Katie Cole.

32 wins this season for the Panthers, the most in the state and a school record.

112 points for Carlie Wagner in the tournament’s three games, a state record.