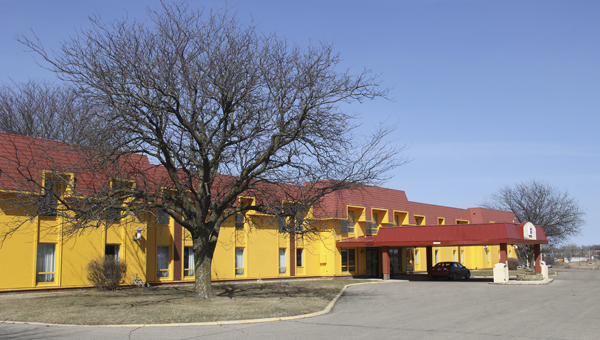 The orange Knights Inn, at 2301 E. Main St., is one of the first sights motorists see when they come to Albert Lea. -- Tim Engstrom/Albert Lea Tribune

The owners of Knights Inn in Albert Lea owe $265,826 in back property taxes and could lose their hotel over it this summer.

And two weeks ago they owed the city $6,577 in back lodging taxes and penalties, but last week one of them paid $1,794 of that debt. 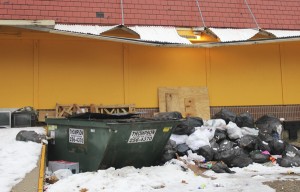 Trash litters the back of the Knights Inn on Feb. 29 because trash removal wasn’t being paid. -- Tim Engstrom/Albert Lea Tribune

Owners Mike Nevins of Albert Lea and Amar Singh of Eau Claire, Wis., bought the hotel in October 2009. They did extensive work to clean up the interior and served food in the restaurant. The exterior received a bright orange paint job, a choice of color many hotel guests question when they walk in and see how nice the marble-floor interior is. It’s a color many Albert Lea residents also question as a bad first impression. The hotel is where motorists enter Albert Lea from Interstate 35 exits 11 and 12.

Nevins, a pilot, is having struggles with Singh, a hotelier and restaurateur. The struggles include finding Singh’s whereabouts and communicating with him.

Nevins said he is looking for stability and would like to comment further for this story but is in the middle of business interests that prevent it. He said he fully intends to pay the back property taxes before the hotel is auctioned at a tax forfeiture sale. 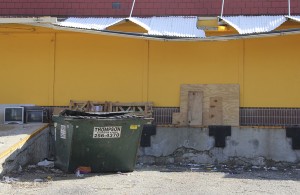 On Tuesday, the bags of trash area at the back of Knights Inn was taken care of, but litter remains from before.

“Based on what I last saw, we have until July at the latest to have this resolved. I have several options to resolve this that I am pursuing. In the end, the taxes will be paid,” he said.

The forfeiture sale is slated for Aug. 9 and likely will be published and served this month, said Freeborn County Auditor-Treasurer Dennis Distad. Freeborn County Assessor Ryan Rasmussen in June will set the minimum bids for the auction.

There still is hope, if Nevins and Singh pay their back taxes by July. The back taxes for the property now stretch back to 2007. When a person buys a property with tax debt, like they did in 2009, they get the debt, too. Often a tax debt will decrease the purchase value of a property.

The company Nevins and Singh own for the hotel goes by the name AM Property Holdings Inc.

As for the lodging tax, records with the city, which collects the lodging taxes, show Knights Inn didn’t pay it in September, October and November last year.

The city collects 3 percent on what is charged every guest at every hotel. That is divided up, with revenue from 2.5 percent of every guest going to the Albert Lea Convention and Visitors Bureau and the other 0.5 percent to the city. The lodging tax offsets the cost of tourism promotion, ultimately getting people to come stay overnight in Albert Lea.

The tax is different than a property tax, which is due no matter what income a property owner makes. If a hotel has no guests, it pays no tax, so rarely do lodging taxes go unpaid for months on end.

Albert Lea City Attorney Lee Bjorndal said the city sent the hotel owners a notice that they could pursue a hearing to discuss such matters as the calculations behind the tax, interest and penalties but the city received no response — that is, until the $1,794 partial payment last week.

The actual unpaid lodging tax was $4,569, but the $6,577 figure, the amount owed as of Jan. 23, included interest and penalties. That was a date on a collection letter sent to Nevins and Singh.

Bjorndal said he is hopeful the hotel owners can complete their payments soon. His next step could be turning the matter over to the Minnesota Department of Revenue.

Bags of garbage collected in piles for much of the winter at the back of the hotel because trash removal was going unpaid. The Tribune photographed a large pile on Feb. 29 and told Nevins about it. He said he would have it removed immediately, and it was.