Progress: How much will we get? 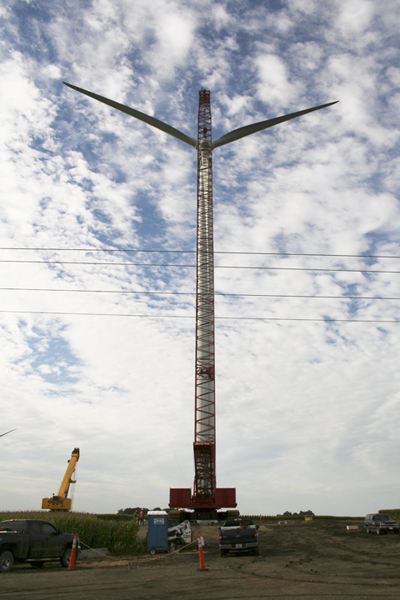 A turbine is installed at Bent Tree Wind Farm in 2010. — Ashley Stewart

Freeborn County is anxiously awaiting its first full year of funding it receives from the state’s energy production tax — the tax that’s collected from wind farms.

Bent Tree Wind Farm is the only wind farm in Freeborn County so far, but others may come in the future. The state collects an energy production tax from all wind farms and then sends a portion back to the county. The county then gives 20 percent to the affected townships, in the Bent Tree Wind Farm case, Manchester and Hartland.

Because Bent Tree Wind Farm is so new, the county still doesn’t know what it will receive from a full year of operation. The wind farm was operating for a small portion of 2010, and the county received that funding in June of 2011.

Kluever said he won’t know how much funding the county and townships will receive from 2011’s production, which would be a full year. Companies like Wisconsin Power & Light, who operate Bent Tree Wind Farm, have to report by Feb. 1 their production levels to the state. He said it’s likely much more than the $55,000 the county received from 2010 production.

“I could try to project, but we don’t know what we’re going to get,” Kluever said.

The funding from the tax goes straight into the county’s general fund, and Kluever said it would be up to county commissioners to allocate the funding to anything specific. Since the county still hasn’t received a full year of funding, he said it will likely be a future conversation for the commissioners.

The amount counties and the townships get could also change from year to year. Kluever said that since wind farms are built in windy areas there will likely always be some production, but some years could be more or less windy than others. It could also depend on how much energy is needed, like if there’s a cool summer one year the turbines may not be needed as much as another year.

Kluever said since the funding may vary, it will be difficult for budgeting over the next 25 years, which is the length the wind farm is contracted to be in the county. Kluever said he tends to budget low for revenues and high for expenditures when he works on the budget each December. He said it’s also possible the state could change the funding formula for how much counties and townships would receive, but that would take legislative action.

Kluever also said that while any funding is always good for the county, even if the county gets something like $400,000, it would be a small percentage of its multi-million dollar budget. For townships, funding from this production tax will make a much different impact. Townships like Manchester and Hartland could potentially get funding that may more than double their budgets.

Bent Tree has 122 turbines and is capable of producing up to 201 megawatts of energy, enough to power 50,000 homes. It is Wisconsin Power & Light’s second owned and operated wind farm. The first is Cedar Ridge Wind Farm, a 68-megawatt wind farm in Fond du Lac County in Wisconsin. It became operational in December 2008.

June 2011: Freeborn County receives about $65,000 from the 2010 production tax on Bent Tree Wind Farm, and 20 percent of that was distributed to Manchester and Hartland townships.

February 2012: Bent Tree Wind Farm reports to the state how much production it had in 2011.

June 2012: Possible time when the county and affected townships will receive their portion of the production tax from the wind farm’s 2011 production.