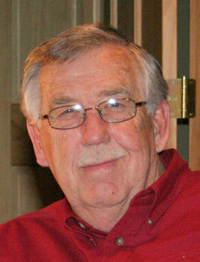 John was born on May 27, 1942, in Eau Claire, Wis., the son of Alvin Charles and Margaret Marie (Root) Olson. He graduated from Albert Lea High School in 1961. He went on to attend and graduate from Mankato State University. He was united in marriage to Ruth Ann Emstad on July 13, 1963, in Albert Lea. He enlisted into the U.S. Navy in 1965 serving for five months before receiving a medical discharge. John worked for Holsum Bakery for 10 years. They lived in Mapleton for eight years before moving to Nevis in 1988, where they owned and operated the In-We-Go Resort near Nevis. John and Ruth Ann operated the resort until their retirement in 2003.

He was very proud of his grandchildren and enjoyed being part of their daily lives. He loved going to Katie and Gavin’s ball games and giving them his special whistle! He has enjoyed watching all the changes in his young grandchildren, Charlie and Ruby, as they are growing up.

He has a good knack for looking into the future to be able to keep the resort moving in the right direction and has many friends support him through all the changes.

He enjoyed meeting new people throughout his life as manager of the bread company, a resort owner and in the past nine years operating a stand at many flea markets throughout Minnesota. He could visit with anybody and was able to remember them years later.

John enjoyed playing practical jokes whenever possible, and he would always come out looking innocent and smelling like a rose.

He is survived by his wife, Ruth Ann Olson of Nevis; his two daughters: Sara (Ed) Becker of Nevis and Lisa (Chris) Martin of Moorhead; his grandchildren; Katie and Gavin Becker and Charlie and Ruby Martin; his brother, Tom (Karen) Olson of Faribault; his nephews: Neil Olson, Ben Olson and Andy Olson.

He was preceded in death by his parents, Alvin and Margaret Olson.

Memorial services will be at 11 a.m. today at the Bethany Lutheran Church in Nevis. A visitation will be one hour prior to the services at the church today. The Rev. Dan Christ will be the officiant. Urnbearers will be Gavin Becker, Ed Becker, Chris Martin, Charlie Martin, Tom Olson, Jim Nagle, Neil Olson, Ben Olson and Andy Olson. A private family inurnment will be held at a later date. Friends may leave online condolences at ceasefuneralhome.com. Arrangements are being handled by the Cease Family Funeral Home of Park Rapids and Nevis.