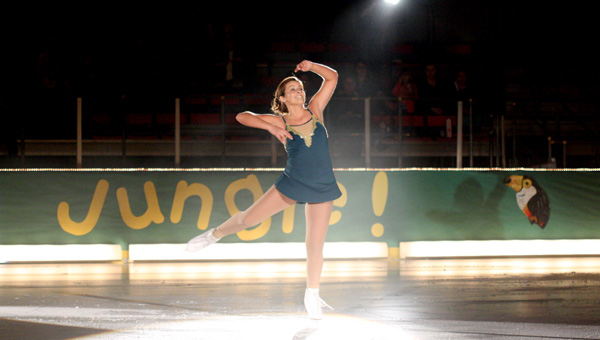 Brandi Hagen/Albert Lea Tribune Senior Samantha Heilman skates to “Don’t Forget to Remember Me” during her solo on Sunday. Heilman has been skating for 13 years.

The Albert Lea Figure Skating Club held their 51st annual show this weekend at Roy Nystrom Arena. The theme was, “Spin through the Jungle”.

There were 31 performances spread across two acts. A 13-year-old from Rochester, Mikaela Potaracke, was invited to be the guest skater. Potaracke performed twice; once to “Little Bird” in the first act and again to “Set Fire to the Rain” in the second. 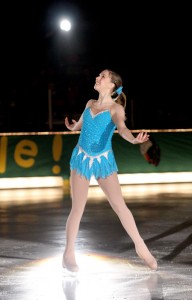 “They asked me to come and skate and I thought it would be a good experience. I was kind of overwhelmed, ” Potaracke said. “This is a great club and it was a lot of fun.”

Potaracke said she has been skating since she was about four years old. She is currently competing at the novice well-balanced level and working on her senior moves. She has taken part in many competitions including the U.S. Figure Skating National Showcase in 2008 where she was a silver medalist.

While the club is not restricted to women, the number of males involved is almost extinct. The only male club member, six-year-old Jackson Cox, played the role of a lion tamer during a performance by one of the clubs’ basic skills groups.

Jackson said being on the ice was, “awesome”. He especially liked that he got to wear a hat and a different costume than the girls.

“It was weird to be honest,” Field said. “We remember when we were little third-graders and looked up to the seniors a lot. Now we’re in that position.”

The jungle decor that circled the rink was designed by Holly Mortenson, a mother of two performers. Some of the details Mortenson included was a volcano, trees with green balloons as leaves and stuffed jungle animals.

“I just couldn’t believe the backdrop,” Carol Colstrup, the founder of the Albert Lea Figure Skating Club said. “Holly is so creative.”

Colstrup did not coach this year, but rather attended the show as a fan. She said the performers just kept improving their show since they started rehearsal for it on Friday.