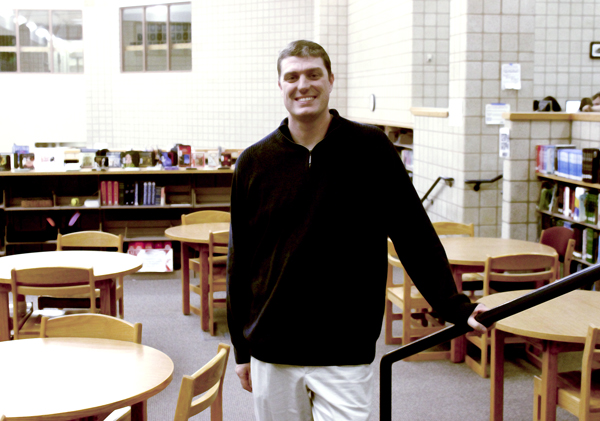 Neil Chalmers stands in the library at the Albert Lea High School. Chalmers is the librarian for Southwest Middle School and ALHS. -- Brandi Hagen/Albert Lea Tribune

With the exception of one year, Neil Chalmers has spent more than half his life coaching one or more extracurricular activities a year for the last 23 years on top of a job.

Chalmers, who originally went to college to become a social studies teacher, has since become a librarian and has coached basketball, tennis and mock trial.

Because of his passion for children and drive to keep opportunities available to them, over the years he has offered to coach volleyball, soccer and swimming — all sports he has no knowledge about.

So far, he has been thankful that there has been other people to fill those positions. But if need be, he would step up to the challenge.

“It would be really difficult and it’s not fair to the kids if you don’t have someone that knows what they’re doing, but in the same sense someone who is going to enjoy being around kids is better than nobody at all,” Chalmers said.

While Chalmers is a big fan of basketball, he can be credited for saving the Albert Lea mock trial program. Eleven years ago there was no team and it has since become a very active program. With help from the Freeborn County Courthouse and local lawyers, the mock trial program had so many kids signed up this year four teams had to be put together, arguably the second largest mock trial program in the state.

As his daughters get older though, it’s becoming a game of tug of war to leave home for student activities.

Chalmers said when he would leave home for mock trial his daughter Grace would say, “good luck Daddy, but not really” because she wanted to have him home more.

Even though he loves to interact with students, without question, Chalmers puts his daughters first.

This year, instead of going to the biggest trial of the season with the mock trial team, Chalmers chose to go to Grace’s basketball game while an assistant coach took care of the mock trial.

“You only get one shot with your own kids,” Chalmers said. “My dad didn’t miss a basketball game of mine from fourth grade through my sophomore year of college. I definitely want to be that kind of father for my daughters.”

As the mock trial season has come to an end, Chalmers was able to take Grace to the New Richland-Hartland-Ellendale-Geneva girls’ basketball game on Friday and watch them beat St. Peter to advance to the state tournament.

He said getting to high-five the sophomore star, Carlie Wagner, after the game made her night.

Chalmers is now looking forward to coaching a spring basketball program through Community Education that Grace will be able to take part in.