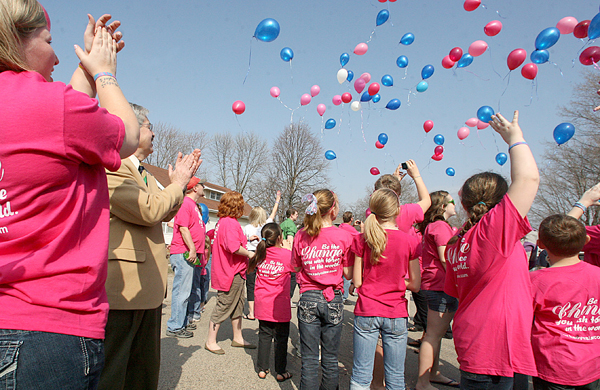 NORTHWOOD, Iowa — Less than a year after a 7-year-old rural Kensett girl was hit and killed while attempting to board a school bus, the Iowa governor on Friday signed into law legislation in her name.

The law is named after the late Kadyn Halverson, who in May 2011 died after she was struck by a pickup as she crossed the street to board her school bus headed to Northwood-Kensett. 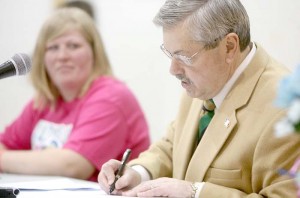 Branstad said it was fitting he signed the law at the very school Kadyn attended, where her classmates could also attend.

“Our children are our most precious resource,” he said.

Branstad was joined by Kadyn’s mother, Kari Halverson, for the signing.

A handful of legislators were also present at the ceremony Friday, along with community members, a half dozen members of the Iowa State Patrol and the parents of Nathan Key, a 5-year-old boy from Mississippi who was struck and killed in a similar situation in 2009.

“This is better than we could have imagined it,” Kari said, noting that she hopes the law will raise awareness of school bus safety.

“I never want another parent to feel the way we have and always will.”

Under the law, a person who fails to slow for a bus with flashing lights or stop when the stop arm is extended can result in fines ranging from $250 to $675 and up to 30 days in jail. The current fine is $200.

Causing serious injury brings a maximum fine of $500 and license suspension of up to 90 days. Causing a death doubles the penalties.

Kim Koenings, an advocate of Kadyn’s Law, who helped research the bill and ultimately get it passed, became emotional during the ceremony. 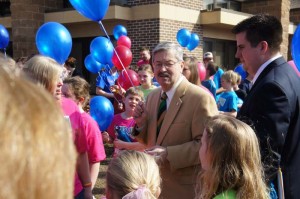 “I’m happy that our kids are going to be safer,” she said after a balloon-releasing ceremony outside the school.

She said her daughter, Amber, rode Kadyn’s bus and boarded the bus two stops after Kadyn. They were also friends on the playground.

“When I told my daughter what happened that day and saw the look in her eyes, that’s when I decided to do this,” Koenings said.

Before the legislative session even began, Koenings and Kari began researching the bill so that on the first day of session they were able to put large pink binders of information advocating the law on the desks of every representative and senator.

The binders contained the support letters from every area education agency in Iowa, surveys from six school districts, 44 towns and more than 100 community members for the proposed legislation.

Branstad said he also met with Koenings and Kari that first day of the session and were impressed with how organized and committed they were to seeing the bill passed.

He said they took “a horrible tragedy and turned it into something good.”

And the Northwood community rallied behind them.

The support carried through to the Legislature, with unanimous approval in both the House and Senate.

“This community has gone through a lot, but your actions, your efforts are going to make a real difference,” Branstad said.

Kadyn’s mother said though it had been a rough road to get to this point, it has been worth every step.