Funeral services for Leona May (Jones) Jordahl will be at 11 a.m Friday, March 16, 2012, at Hartland Evangelical Lutheran Church in Hartland. The Rev. Shawn Stafford will officiate. Interment will be at the Combined Hartland Cemetery following the church service. Visitation will be from 5 to 8 p.m. Thursday at Bayview/Freeborn Funeral Home and one hour prior to the service at the church. To sign the guestbook go to www.bayviewfuneral.com. 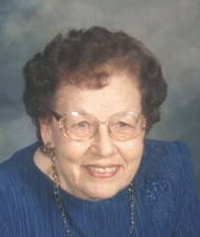 Leona entered eternal glory with Jesus when she died of natural causes on March 9, 2012. She had been a resident of the Cedarview Care Center in Owatonna for the past several years.

Leona was born on July 5, 1922, to parents William and Myrtle (York) Jones. She grew up in Albert Lea and graduated from Albert Lea Junior College. She married John Jordahl of Hartland in 1943. Together they lived on a small farm in rural Hartland. They raised two children, son Orville and daughter Alice.

Leona was preceded in death by her husband, John; her parents; and brothers: Ray, Dale and Lloyd. Leona was the last surviving member of the William and Myrtle Jones family.