Lucille Gladys Rame, 83, of Bricelyn, died Tuesday, March 20, 2012, at Mayo Clinic Health System in Albert Lea. Funeral services will be at 10:30 a.m. Monday at North Blue Earth Lutheran Church in rural Bricelyn. Visitation will be from 2 to 5 p.m. Sunday at Bruss-Heitner Funeral Home in Bricelyn, and will continue one hour prior to the service at the church on Monday. The Rev. Luther Peterson will officiate and burial will take place in North Blue Earth Cemetery, Brush Creek Township, Faribault County. Bruss-Heitner Funeral Home in Bricelyn is assisting the family with arrangements. 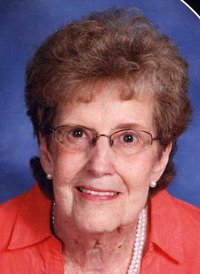 Lucille Gladys (Hendrickson) Rame was born Sept. 1, 1928, in Brush Creek Township to Gustav and Gladys (Nelson) Hendrickson. She was baptized at Bricelyn Lutheran Church and confirmed Oct. 25, 1942, at Our Savior’s Lutheran Church in Wells. She graduated from Wells High School in 1946 and attended Mankato Commercial College. She worked for Standard Oil in Mason City, Iowa, and in Mankato, before her marriage. On July 22, 1951, she was united in marriage to Helge Rame. Four children were born to this union. Helge and Lucille lived on a farm north of Brush Creek and she continued to live there until her death. She was a member of North Blue Earth Lutheran Church in rural Bricelyn, and was active in the WELCA. She enjoyed the neighborhood birthday club, watching the Minnesota sports teams, card games and being with family. Helge and Lucille enjoyed square dancing and traveling, especially their trip to Norway. Other special trips were a cruise to Alaska with her children on her 80th birthday, and a trip to Hawaii with Scott’s family. She was a collector of cookbooks, unicorns and Santas. Lucille enjoyed all types of sewing and handwork, and was especially known for the beautiful hardanger items she .made and often gave to others as gifts.

She was preceded in death by her husband, Helge, in 2006; her parents; a sister, Beulah Nichols; and brothers: George, Aldean and Gerald Hendrickson.