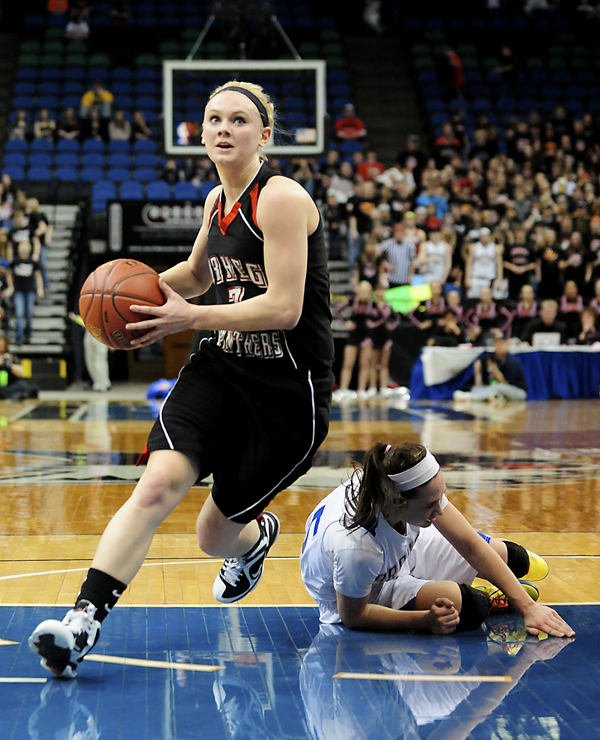 New Richland-Hartland-Ellendale-Geneva’s Carlie Wagner drives past Braham’s Rebekah Dahlman on Wednesday night during the first half of the Class 2A quarterfinals at the Target Center. Wagner scored a career-high 43 points in the win. -- Brandi Hagen

On a night when Dahlman set the state’s all-time scoring mark as a junior, Wagner poured in a career-high 43 points and led the New Richland-Hartland-Ellendale-Geneva girls’ basketball team to a 75-45 blowout of the defending state champion Bombers on Wednesday in the Class 2A quarterfinals at the Target Center.

Wagner scored 19 of the Panthers’ first 21 points and shot 18 of 33 from the field as she finished four points shy of the tournament’s single-game record.

“She’s one of the best opponents I’ve ever played against,” said Dahlman, who was named the state’s Player of the Year by multiple media outlets this season, including ESPN and the St. Paul Pioneer Press. “She’s the quickest player I’ve ever guarded.”

In arguably the most anticipated matchup of the state tournament, Dahlman, who was the focal point of the Minneapolis Star Tribune’s Sports Section on Wednesday, didn’t guard Wagner in the first half as the sophomore single-handedly erased an 8-0 deficit after a turnover-plagued start and had 21 points at the break.

Wagner was defended by the third-ranked Bombers’ star to start the second but was not fazed and scored eight points in the opening two minutes and assisted on the next four. She had 22 in the second half before exiting with 90 seconds left as the Panthers outscored the Bombers 48-26.

Panthers coach John Schultz said he was excited for Wagner to face off against Dahlman, who has received much more statewide attention than the sophomore.

“She didn’t understand how good she was herself until she dabbled in it, took it a few times to the hole and realized she could keep doing it,” Schultz said. “But she’s been doing it all year.”

The Panthers, making its first state tournament appearance since 2004, had four turnovers before it scored a point, and watched Braham, a veteran of the big stage in its four straight trip, score eight unanswered points to start the game.

After starting 0 for 2, forcing deep jump shots that clanged off the rim, Wagner finally drove into the paint out of a timeout and scored the first two of 13 straight points, which tied the game at 13-13 with seven minutes left in the first half.

Anna Schlaak, who scored 16 points and had a game-high five steals, snatched an offensive rebound on the Panthers’ next possession and made a short jump shot to give NRHEG its first lead at 15-13, and it never trailed again.

The second-ranked Panthers (31-0) dominated the Bombers (29-2) in the hustle categories, holding a 22-12 advantage in points off turnovers and 17-1 in second-chance points. The Panthers also had a 44-20 edge in points in the paint and 16-6 in transition.

“We knew they were a really good team and we just had to take it to them, play tough defense and that’s what we did,” Wagner said.

Dahlman finished the game with 29 points — seven below her average — and 3,895 on her career. She passed Minneapolis South’s Tayler Hill’s previous mark of 3,888 in the second half but showed no elation when the record was announced and she received a standing ovation from fans of both sides.

“It’s sweet to break that record,” Dahlman said. “But honestly I’m pretty disappointed in myself right now more than anything else.”

Wagner said she “idolizes” Dahlman and called her a “spectacular player,” but said she didn’t consider the game a duel between the two standout point guards.

When asked if she proved herself among the top players in the state by upstaging Dahlman, Wagner responded:

“That’s for everybody else to decide.”

Following the game, Dahlman embraced Wagner on the court and wished her good luck in the rest of the tournament and her career.

“She’s going to go far. I can guarantee that,” Dahlman said.