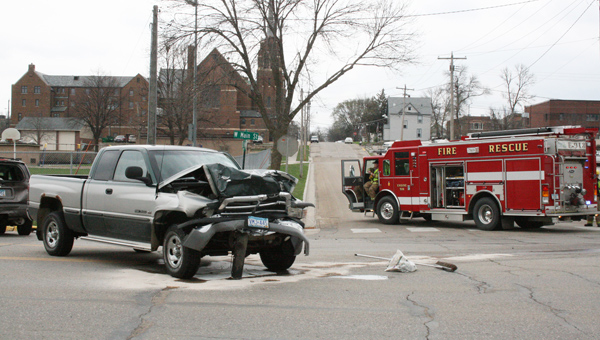 A 1998 Dodge truck sits crashed in the intersection of St. Mary Avenue and West Main Street Thursday afternoon after the truck crashed into an SUV. The driver of the truck reportedly blacked out. -- Sarah Stultz/Albert Lea Tribune

A man was transported to Mayo Clinic Health System in Albert Lea Thursday after he reportedly blacked out, crashed into signs in a median downtown and then rear-ended a sport-utility vehicle.

According to Albert Lea police, Anthony Alvin Hagen, 51, of Albert Lea was driving west on Main Street in a 1998 Dodge pickup, when he reportedly crashed into street signs near Wells Fargo bank, just east of Broadway Avenue.

Hagen reportedly told police that the last thing he remembered was eating a french fry at McDonald’s before he collided with the vehicle.

Police stated Hagen continued through the stoplight at Broadway Avenue and Main Street before rear-ending a 2008 Chevy Trailblazer at the intersection of Main Street and Washington Avenue.

The Trailblazer was driven by Tim John Kedrowski Lenhart, 51, of Albert Lea.

Albert Lea Police Lt. J.D. Carlson said the SUV was pushed about a block before both automobiles stopped at the intersection of St. Mary Avenue and Main Street.

A light pole was also knocked down.

The crash was reported to authorities just before 1:30 p.m.

Carlson said Lenhart was given a ride home, and Hagen was transported by ambulance to the hospital with unknown injuries.

Carlson said there was no indication that alcohol was involved.

Traffic was detoured off of Main Street while the crash was cleaned up.