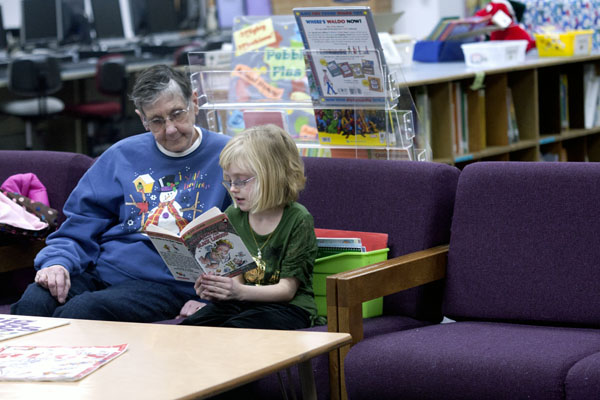 Zoe Lawson, a second grader at Hawthorne reads to Patricia Dollum after school. Dollum is a retiree who volunteers her time to help children with their reading skills. — Brandi Hagen/Albert Lea Tribune

Just before 3 o’clock. She walks into the near empty library. A young girl with glasses and short blonde hair bounces up and down on a purple couch in excitement.

Patricia Dollum, a volunteer reader at Hawthorne Elementary School, takes a seat next to Zoe on the couch. She lays out three books for Dollum to choose from. 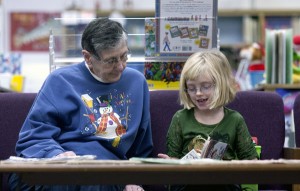 Every Wednesday, Dollum spends a half hour reading with Zoe after school. As a widow and retiree, Dollum wanted to find something to do with her time. When a reading position became available, she accepted.

As a young woman, she had wanted to be a teacher, but a married life and children came first and the idea “fizzled out.” Without really realizing it, Dollum said the time she spends with children reading is probably fulfilling that dream a little bit.

Last year was Dollum’s first time reading in the schools. She had read about positions in a newspaper and became interested. She figured if she didn’t like it she could always stop. That was not the case and she believes as long as she is able to do it, she will continue.

“If I can help a child read, it makes me feel good,” said Dollum.

Zoe is the second child Dollum has read with. The first was a boy in fifth grade.

There were many distractions with children coming in and out of the classroom when she read with the young boy, and it became hard to concentrate. With Zoe, they sit in the library where the only other person around is media clerk, Nikki Worman.

After reading with the young boy, Dollum received letters from him and his teacher saying how much she had helped him. She felt accomplished for being able to help him become a better reader.

Dollum said it was an adjustment switching from a fifth-grader to a second-grader because of the size of the books, but she doesn’t mind.

When Zoe is unsure of a word, she makes an attempt to sound it out and then she lets Dollum kindly correct her. To check for comprehension, Dollum asks Zoe questions as they read.

Worman believes Dollum gets satisfaction from seeing Zoe’s face when they spend time together and Zoe benefits from the one-on-one time.

“Zoe has that special time with Patricia and nobody else,” said Worman. “Nobody else is competing to read with Patricia, and there’s not the interruptions there might be at home. It’s just one-on-one time with a special person.”

Cuddled up next to Dollum, Zoe usually does the reading, but there are times when she would rather be read to.

The time flies when Zoe and Dollum are together.

“She says, let’s read another book,” Dollum said. “I say, honey we can’t, the time is up, but we’ll read more next time.”

What is supposed to last a half hour, sometimes lasts as long 45 minutes.