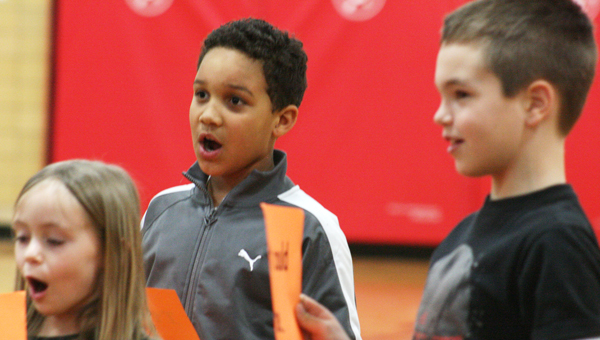 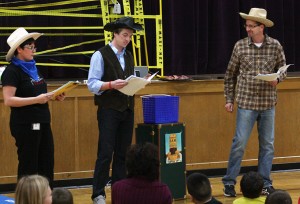 Hawthorne Elementary School teachers Maurna Rome, Ben Frayne and Tom Dyrdal dress up in cowboy hats as they read a story to students at the school Wednesday durning a Reading Rocks and Math Rolls assembly.

Teachers at Hawthorne Elementary School combined these four elements Wednesday to illustrate the power of reading — and of understanding what you read.

During what has become a monthly assembly at the school called Reading Rocks and Math Rolls, the teachers acted out the story of “Cowboy Sam and Those Confounded Secrets,” written by Kitty Griffin and Kathy Combs. Combined with some participation by the students, the teachers taught the value of inferring, or asking questions while reading.

“Sometimes you have to read in between the lines,” said teacher Maurna Rome to the gymnasium of students. 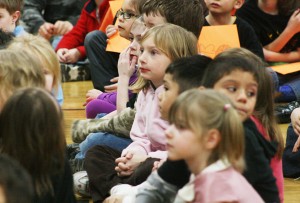 In prior months, the teachers taught about skills such as summarizing, predicting and making connections, among others.

“It brings home the point that reading is about understanding what you read — getting a message from what you read,” Rome said.

On Wednesday, teacher Ben Frayne played the main character, Sam, who gets told secrets by all of the townspeople. When he gets too many secrets under his hat, he struggles with how to keep all of the secrets under wraps.

The students practiced inferring as they read aloud cards about how Sam could keep the secrets in his hat. 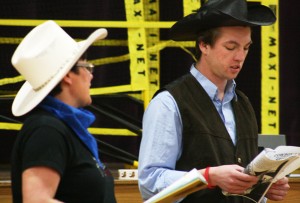 Ben Frayne, right, follows along while a group of teachers acted out “Cowboy Sam & Those Confounded Secrets” Wednesday at Hawthorne Elementary School.

In previous months, there had been skits, games and other activities to teach the strategies.

After the students learn about the strategy during each assembly, they go back to their classrooms, where their teachers continue to teach about the skill.

Photos taken during the event — along with a copy of the cover of the book read that month — are posted on the wall in the front hallway at the school.