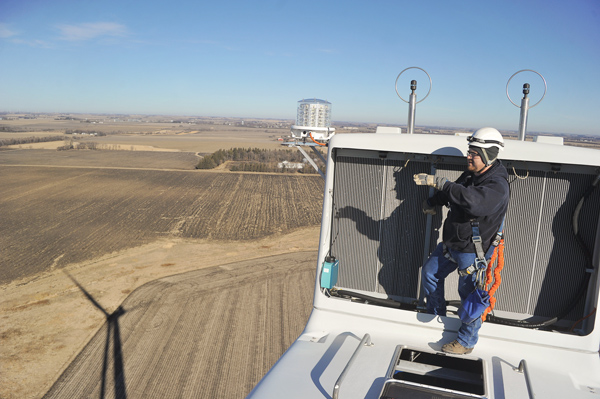 Lead technician out of the LeRoy office for Vestas, Eric Anderson talks about maintenance for the wind towers while standing on top of one just south of Grand Meadow. -- Eric Johnson/Albert Lea Tribune

This story first appeared in the spring issue of the magazine Southern Minnesota. Read it and similar stories available now.

Craig Wiste and Eric Andersen face a tall order every morning when they arrive at work.

Their task is comparable to maintaining and repairing a car, but everything is bigger, taller and more complex. 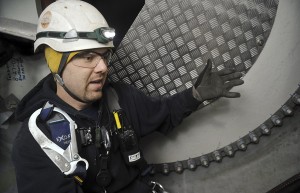 Lead technician Craig Wiste sits inside the hub of a wind turbine just south of Grand Meadow, describing the basics of how they work.

Their job is to ensure 243 Vestas Americas wind turbines — 182 in Iowa and 61 in Minnesota — continue operating efficiently and producing power, a job in which most technicians take great pride.

“There’s something really satisfying about getting a multi-million dollar piece of machinery running again,” Wiste said.

Wiste and Andersen are part of a 34-person team working out of the LeRoy Vestas office at the 400-megawatt Pioneer Prairie Wind Farm. Though the job of a wind farm technician requires skills with mechanics, electricity and hydraulics, there’s no other job quite like it.

“There’s really no job that can prepare you for this job,” Wiste said. “It’s a job like no other.” 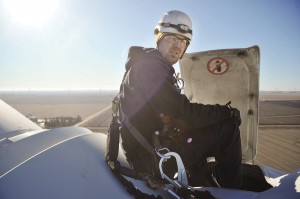 Lead Vestas technician out of LeRoy, Craig Wiste sits on the hub of a wind turbine south of Grand Meadow before sliding inside.

“Our guys take a lot of pride in their work,” Andersen said. “They make sure that they catch everything they can during routine service, and that really minimizes the chance of a turbine faulting.”

While many people spend workdays at paper-littered desks, the bulk of a wind farm technician’s day is spent in a turbine’s nacelle, the base of the turbine at the tower’s top that houses the bulk of the machinery.

Though some towers have climb assists or lifts, many workers reach the nacelle by harnessing into a guide wire and climbing a ladder located inside the turbine so the climber’s back is near the turbine wall.

“You get so used to it, it doesn’t feel unsafe at all,” Wiste said.

The company prides itself on safety and holds safety meetings every morning, one of the ways they keep themselves safe keeping turbines running. Wiste, who previously worked as an auto mechanic, said much of a wind technician’s work is comparable to routine maintenance on a car. Technicians, who generally work in three-man teams, spend six to eight hours a day maintaining a turbine by checking oil filters, greasing gears, cleaning and torquing bolts.

But a career as a mechanic doesn’t fully prepare workers for the challenge of a turbine.

“You’re not running around with a little torque wrench like you are on a car. … You’re using big tools and heavy tools. Guys really have to take care of themselves up there when they’re working.”

The nacelle resembles a large, simple engine with the blades turning a large axle-like rotor shaft that extends into the gearbox. The gearbox is large enough that workers can lay over its curve for warmth in the winter. The inside of the nacelle is comparable in size to a small, cramped bus.

The turbine is shut down for maintenance.

For the most part, workers only need to service turbines once or twice each year for maintenance purposes. And with 243 turbines for about 30 technicians, Wiste said they’re always moving on to the next turbine.

“You can about imagine that we never get a break,” Wiste said. “By the time you finish the last one, you start the new one.”

Andersen described the work as multiple specialties tied into one.

“You get a real good taste of everything,” he said.

As lead technicians, Wiste and Andersen spend more time on the ground, helping general technicians and doing some managerial work.

Similar to cars, leaks and other issues will show up on turbines often during scheduled maintenance checks.

The goal is to maintain turbines regularly to save the workers from extra work later and keep the turbines producing energy for their customers.

Technicians also take turns being on call. During the week, they’ll focus on alarm turbines, which makes for 10-hour days along with some weekend and night work.

“Everyday’s the same, yet everyday’s a little different,” Andersen said.

Alarm work generally requires maintenance crews to repair electrical problems like loose wires or hydraulic issues. Wiste said they rarely see the same issue break down a turbine twice, and a variety of different things can cause a breakdown.

Repairing a turbine that breaks down can be anything but routine. Wiste said a great deal of troubleshooting is required because many different variables can cause a turbine alarm.

Despite the extra work, Wiste said a lot of workers like on-call duty, because it breaks up the routine of regular maintenance and it’s a good chance to learn how to troubleshoot a range of issues.

The side walls of the nacelle are mostly fiberglass, so workers must deal with Minnesota weather year-round.

In the summer, turbines don’t always make for fun in the sun. Wiste said nacelle temperatures can reach 140 degrees.

In high temperatures, Andersen said crews only work early or don’t go out at all.

The nacelle typically stays comfortable enough to work in a sweatshirt in the winter because the hydraulics give off heat before they’re shut down for maintenance.

But once a machine is shut down, the cold can take over quickly, Andersen said.

For much of the year, Wiste said they have comfortable working temperatures of 50 to 70 degrees.

Though there are limits for working in high winds, Andersen said a nacelle will sway as much as 4 to 5 feet on breezy days.

Being stuck on top of a swaying turbine with a colleague can generate conversation as well as a water cooler, and many friendships start on the job. Site Manager Michelle Berdusis said she’s seen technicians build strong friendships while working.

“They also have built some really strong friendships, and it’s nice to see, and they’re keeping each other safe up there, because I can’t be there with them,” she said

Most of the workers have been with the company for multiple years, and Berdusis said the company tries to promote technicians from within.

With all the variations in the job, Andersen said one thing is for certain: “It’s definitely a unique job.”