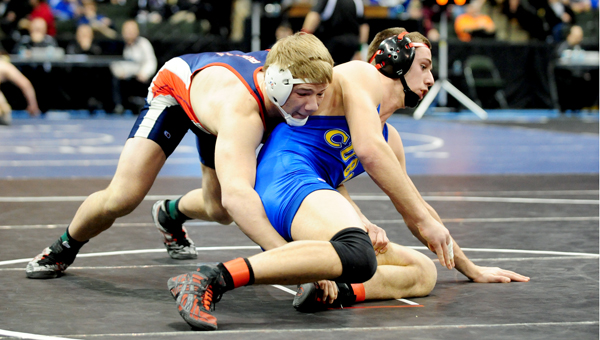 Thisius, a second-ranked senior, lost to top-ranked Nate Meixell of Lake Crystal-Wellcome-Memorial 5-4 in the semifinals.

After a scoreless first period, Meixell notched a takedown to start the second period, but Thisius responded with an escape and takedown to take a 3-2 lead.

Meixell regained a 5-3 lead to start the third period, and an escape from Thisius pulled him within a point but he could not score a takedown before time expired.

Thisius beat third-ranked Greg Erlandson of Breckenridge/Campbell-Tintah 3-2 in the third-place match to finish his senior season 42-3.

“I had a tough loss to Meixell in the semis and it was just really nice to bounce back and get third after that,” Thisius said.

Herman was pinned in the semifinals by top-ranked and eventual state champion Oakley McLain of Kenyon Wanamingo before beating Border West’s Gus McCarthy 7-6 in the third-place match.

Herman led 2-1 after a takedown in the first period and built a 5-2 lead to start the third after three back points in the second.

Herman started the final period up, but McCarthy got an escape with one minute and 15 seconds remaining. Herman’s takedown extended his lead to 7-3, and an escape and takedown by McCarthy made it a 7-6 final.