The funeral service for Robert “Bob” F. Petersen of Albert Lea will be at 10:30 a.m. Monday at Trinity Lutheran Church. The Rev. Curtis Zieske will officiate. Interment will be in Hillcrest Cemetery. Military honors will be accorded by Albert Lea veterans’ organizations. Visitation will be from 5 to 7 p.m. Sunday at Bonnerup Funeral Service, Albert Lea, and one hour before the service at the church. 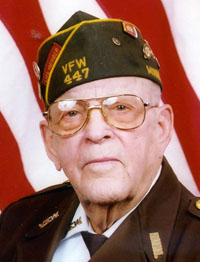 Bob died peacefully at his home surrounded by the love of his family on Wednesday evening Feb. 29, 2012. He was 90.

He was born on March 11, 1921, in Albert Lea the son of Jens and Jacobina (Nielsen) Petersen. Bob was raised, went to school and lived most of his life in the Big Island area east of Albert Lea. He was baptized and confirmed at Trinity Lutheran Church in Albert Lea. When Bob was 19 he served our country in the United States Army where he had been stationed in Attu. While in the service he learned to operate heavy equipment so following his honorable discharge he returned to Albert Lea and worked in road construction until his retirement. Bob married Marcia D. Hermann on Oct. 6, 1947. He and his “bride” shared more than 64 blissful years together.

He was an active member of Trinity Lutheran Church, Danish Brotherhood, the Moose, D.A.V., American Legion, Minnesota Coalition for Immigration Reduction, lifetime member of the V.F.W. and the Pheasants for Habitat. Proud of his country, Bob helped honor more than 1500 Veteran’s with military honors.

He was a skilled, imaginative carpenter and handyman. His projects touched many hearts, especially his family’s. He enjoyed gardening and was a great collector of “treasures” Music played a special part in Bob’s life. He was in many bands and played many instruments throughout his years, and will be remembered for his accordion playing.

He was preceded in death by his parents; a son in infancy; sister, Dennise Nielsen; brothers: Axel and Harry “Pat” Petersen.

Memorials may be sent to Trinity Lutheran Church, Mayo Clinic Health System Hospice or a charity of your choice.