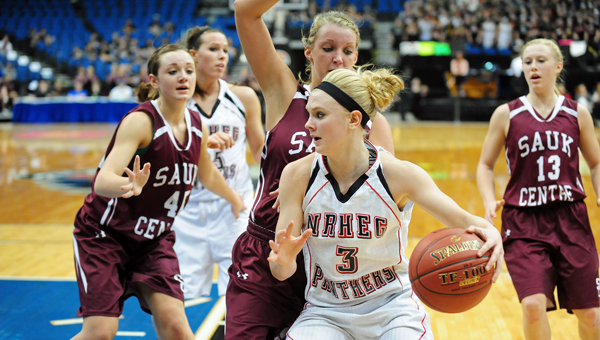 MINNEAPOLIS – Another game. Another eight-point deficit right off the bat.

This time, Carlie Wagner was unable to bring the Panthers back. 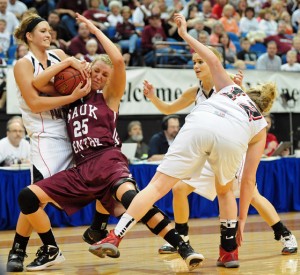 The Panthers' Anna Schlaak, left, rips the ball away from Sauk Centre's Kali Peschel in the Class 2A semifinals at the Target Center. -- Danielle Boss

After lighting up the defending champs for 43 points on Wednesday and turning an 8-0 deficit into a 30-point rout of Braham, New Richland-Hartland-Ellendale-Geneva’s Wagner faced two, sometimes three Sauk Centre defenders on Friday night in the Class 2A semifinals at the Target Center.

The Panthers trailed 10-2 early and again had more turnovers than points in the opening minutes. But unlike in the quarterfinals, the Panthers’ opponent didn’t bend to Wagner’s will.

The star sophomore was held to 21 points on 8 of 23 shooting and received little help from her teammates, who combined to go 6 of 37 from the field, including 2 of 25 from behind the arc.

“We need to be more balanced, offensively,” Panthers coach John Schultz said. “Teams are going to focus on Carlie and we need more offensive threats on the floor. We didn’t have that.”

Sauk Centre’s twin towers, Macy Weller (6 feet) and Kali Peschel (6-feet-1-inch) each scored 18 points and combined to shoot 14 of 29. Peschel, who has committed to the University of Iowa, made two deep 3-pointers to lead runs to start each half and added a game-high 12 rebounds.

Meanwhile Wagner, who has made a living slicing through opposing man-to-man defenses, was held out of 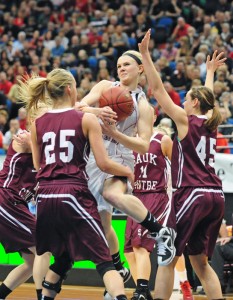 New Richland-Hartland-Ellendale-Geneva's Carlie Wagner is surrounded by four Sauk Centre defenders on Friday during the Class 2A semifinals at the Target Center. Wagner received much more defensive attention after scoring 43 points in the quarterfinals. -- Danielle Boss

the lane and forced to shoot contested jump shots. Some of them fell, but with little production from her supporting cast, Wagner needed them all too.

After managing 12 points through the opening 16 minutes, the Panthers turned it on after trailing by 12. The team scored eight points over the final 1:40, which included a last-second jumper from seventh-grader Maddie Wagner heading into the half.

The Panthers’ 8-0 run into the break pulled it within four points, but the Mainstreeters scored 14 straight to start the second and held the Panthers scoreless over the opening seven minutes.

“We just went cold,” Wagner said. “We needed a wakeup call or something to get us going. We didn’t wake up soon enough.”

While the Panthers scored back-to-back field goals only once in the second half, Sauk Centre’s dynamic duo had an answer each time NRHEG looked to gain momentum.

After Wagner broke the Panthers’ scoreless streak in the second, Jade Schultz made a layup and Wagner drilled a 3-pointer, part of seven points in 60 seconds to pull NRHEG within 40-27 with 10 minutes remaining.

Peschel answered the spurt with a layup, and after Maddie Wagner’s 3 cut Sauk Centre’s lead to 12, Peschel scored again and Weller knocked made a pair of free throws to extend it back to 16. 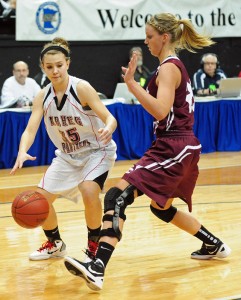 The Mainstreeters led by as many as 21 when Jena Klaphake stole the ball from Wagner at the top of the key and led a fast break that resulted in a Weller 3-pointer to make it 51-32.

After scoring 16 fast-break points in its win over Braham, the Panthers were held to just two.

Schultz said the team’s inability to get stops of defense led to few opportunities to transition.

“They just kept coming at us,” Schultz said. “We’re not going to get the run game going if we can’t stop them from scoring.”