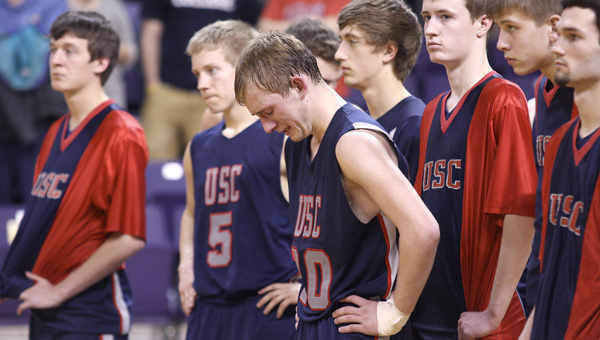 It was a disappointing and emotional loss for USC especially since at halftime they trailed by just three points.

“It was a back and forth game there for a little bit,” USC coach Rob Stevermer said.

Kyle Bauman made a basket to start the second half leaving the Rebels down just 31-30. Less than a minute later though, St. Peter’s Chad Poppen made a 3-pointer and Ben Rosburg made two baskets.

Fans were cheering so loud, it was the only thing to be heard in the gym. The intensity fueled the Rebels and with just six minutes remaining in the game they were just shy of the lead 51-47.

Due to fouls from USC, St. Peter was able to widen the gap with free throw points and win the section championship title with an eight point lead.

“We missed a couple of scoring opportunities and they didn’t,” Stevermer said. “They converted when they needed to, they made their free throws, finished some layups around the bucket and we missed a few and had to try and catch up. It was just hard for us to catch up.”

Stevermer said USC’s objective was to play really good defense and credits St. Peter for being such a physical team that it became difficult to stop from them scoring.

As the basketball season came to an end for the Rebels, many tears were shed.

“Not just tonight, but all year long I’ve been so proud of them,” Stevermer said. “It was the best group of kids I’ve ever had coaching.”