Tigers’ 4 within reach of finals 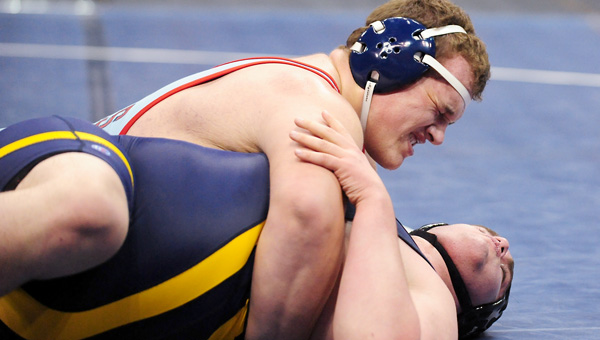 A freshman at the time, DeBoer joined the No. 3-ranked Tigers for just two days at the end of the season, to test the water, he said, but ultimately elected to spend his winters lifting weights for football.

After his final season as the anchor of the team’s offensive and defensive line this fall, DeBoer chose to jump back onto the mat where he’s now one win away from the state finals.

DeBoer, along with junior Trevor Westerlund at 106 pounds and seniors Dalton Westerlund (160) and Trey Hable (170) reached the semifinals on Friday of the Class AAA individual state wrestling tournament at the Xcel Energy Center in St. Paul.

Albert Lea’s four semifinalists went 2-0 on Day 1 of the tourney, and six of its seven healthy wrestlers survived to compete on Saturday.

Garrett Wangsness (113) was eliminated after two straight defeats, and Triston Westerlund (152), who qualified for state after placing second at the Section 1AAA tournament, was out due to a separated shoulder.

Lucas Hansen and Dakota Wangsness lost their openers but won in the wrestlebacks.

With the Tigers continuing its impressive run through the postseason (the team qualified the third-most wrestlers to state in Class AAA), DeBoer has made the biggest splash – literally.

The 6-foot-7-inch senior, who lost 40 pounds after the football season in order to wrestle in the heavyweight class, used his bruising frame twice on Friday to flatten his opponent for a pin.

DeBoer said he never thought he’d be two wins from a state title this season, but credited his hard work and one particular coach for the opportunity.

“I’ve gotten into great shape and have improved my balance and positioning,” said DeBoer, who wrestled on Saturday No. 2-ranked Corey Anderson of Shakopee in the semifinals. “Me and (coach) Ryan Palmer work on that everyday in practice. It shows you what a great coach can do.”

DeBoer opened the state tournament with a favorable draw and four, including himself, unranked heavyweights in his quarterfinal.

In the first round, he turned a scoreless match into a win after he threw Tartan’s Jason Telin and pinned him one minute and 10 seconds into the match, and in the quarterfinals, DeBoer built a 9-5 lead in the first period over Rosemount’s Stefan Sauer before dropping and pinning him 47 ticks into the second.

Tigers coach Larry Goodnature chased down DeBoer following his second pin and gave him an emphatic high-five. He later called DeBoer a “great athlete and coachable kid” who’s dedicated himself this season to the sport.

“I’m happy for him. It’s something neither him nor myself thought was going to happen at the beginning of the season,” Goodnature said of DeBoer reaching the semis. “To come out one year and place in the state tournament is phenomenal, and you have to give Palmer credit for bringing him along.”

DeBoer’s second win wrapped up a perfect quarterfinal round for the Tigers, which went 4-0 to send its four wrestlers to the semis.

Top-ranked Trevor Westerlund notched four takedowns in a 9-5 win over St. Michael-Albertville’s Aaron Dick in the quarterfinals, while only allowing escapes to pull within a win of the championship match.

Each wrestler weighed-in for the final time this season following their final match on Friday, and Trevor said he’s going to take advantage and have plenty of energy for his semifinal match against No. 8 Reid Leyden of East Ridge.

Dalton Westerlund opened the tournament with a 17-2 technical fall over Matt Strasser of Spring Lake Park before shutting out White Bear Lake’s Cody Anderson 5-0 in the semis.

No. 2-ranked Hable pinned Forest Lake’s No. 7 Michael Urban in the first round and won 16-6 in the semis over Levi Rubin of Brainerd/Pillager.

Albert Lea junior Lucas Hansen’s opening match ended in controversy after what looked like a one-point win turned into a one-point loss in the final second at 126 pounds.

Hansen led Elk River’s Evan Caldon 2-1 throughout most of his first-round match, including the final seconds when Caldon scrambled for a takedown.

Elk River’s coaches hollered for a two-point takedown as Caldon spun to Hansen’s side and got it with one second on the clock.

Tigers assistant coach Jon Hansen, Lucas’s dad, petitioned the call for nearly a minute after the match and looked on in disbelief after the two wrestlers exited the mat and the ensuing match began.

Lucas said it was a “bad call” that left him speechless.

“I was hanging on there and I thought I had won the match until I heard my dad yelling,” he said. “I looked at the scoreboard and saw that I lost and was really confused. I didn’t think there was two (points) at all, but you can’t do anything about it.”

Lucas later won 8-0 over Henry Wolfbauer of Hopkins in the wrestlebacks.

Fight for the finals

Goodnature said the work was not done for the four Tigers wrestlers who reached Saturday’s semifinals, and while they’re all guaranteed to place within the top six, he expects them all to push for first, second or third.

“It’s something everyone dreams about,” Goodnature said of wrestling in the state title match. “You’ve got six minutes to go out there and give in everything you’ve got.”

While the unranked DeBoer was set to face one of the top heavyweights in the state with a trip to the finals on the line, he was confident his run wasn’t going to end just yet.

The senior said his dedication to wrestling and his body this season has not only made him a much improved wrestler from his debut on Dec. 15, 2010, but has improved his life.

Asked if wrestling has whipped him into the best shape of his life, DeBoer answered: