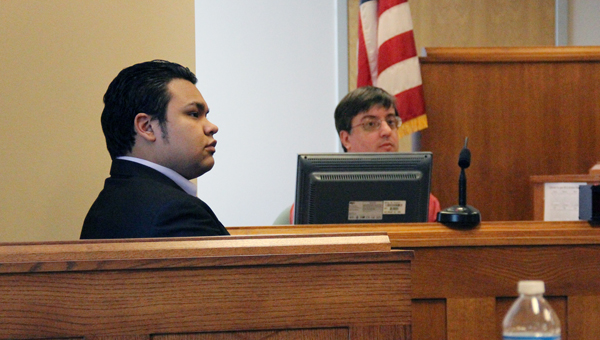 ROCHESTER — The Albert Lea mock trial team has been preparing for the state competition since December by learning a fake court case inside and out.

On Tuesday, they took their arguments to the state competition in Rochester at the Olmsted County Courthouse. 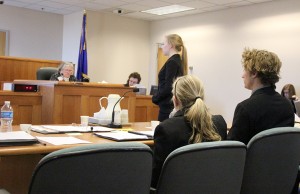 The Albert Lea High School mock trial team competed against Lakeview Secondary School of Cottonwood in its first round at 4 p.m. Tuesday. The team competed at 7 p.m. against Cloquet High and then again today at 9 a.m. The results of all three trials will be announced at a banquet today; look for the results in the Thursday issue of the Tribune.

“I think it was a great trial on both sides,” coach Neil Chalmers said. “I’m very proud of our kids.”

Each team at the state tournament competes three times and is randomly assigned right before the trial which side they’ll play. Against Lakeview, Albert Lea was the plaintiff. Team members Macy Paul, Addison Petersen and Sean Laurie are lawyers. When plaintiff, Sami Klapperick plays Rook E. Greenwood, Stuart Behling plays Sgt. Myron Goddard and Sergio Salgado plays Leslie Loudermouth. All three are witnesses. Annabelle Randall was the bailiff, and Shelby Illg was the timekeeper during the team’s first trial Tuesday.

As plaintiff, Albert Lea’s lawyers argued that Greenwood, a police officer who was fired from the fictional Reillyville Police Department, was wrongfully terminated not for her performance but for a posting she made on a social networking site called ReillyBook in the case. The defense argues that Chief Billie Durden had just cause to fire Greenwood. 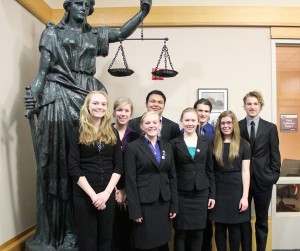 Albert Lea’s mock trial team poses for a photo by the Iron Lady at the Olmsted County Courthouse after the first round of the state tournament Tuesday evening. From left in front are Sami Klapperick, Macy Paul, Addison Petersen and Shelby Illg. From left in back are Annabelle Randall, Sergio Salgado, Stuart Behling and Sean Laurie.

Petersen started off Albert Lea’s opening statement by saying that Greenwood was unjustly terminated from her job after Durden found a posting she had made on her ReillyBook page. Petersen said Albert Lea’s team would argue four points. The first was that Durden had the ability to fire employees with just cause. The second would be that Greenwood’s Reillybook posting was free speech. The third was that her posting was the motivation behind the termination, and the fourth was that Greenwood would no longer be able to pursue her passion of protecting citizens as a police officer.

Laurie then took over the direct examination of Greenwood, before she was cross-examined by Spencer Larsen. Both teams have the opportunity to object to testimony and both did so while giving their reasoning. Val Parranto Davis, one of the many lawyers who volunteer for mock trial tournaments, was the presiding judge who either sustained or overruled these objections.

The testimony by the other team’s Rin T. Tin, a citizen in Reillyville, was important to both teams. Tin explained that he complained to the police department after he felt Greenwood was giving a half-hearted investigation into a matter. Albert Lea’s team argued that Tin had a history of filing complaints against other officers that didn’t result in them being fired like Greenwood had been. Lakeview’s team argued that the complaint from Tin was just the breaking point because Greenwood did not have a stellar track record with the department.

Albert Lea quickly found a hole in the other team’s argument that Greenwood was in the wrong for posting the comment on Reillybook using a work-issued phone and on company time, when they got Lakeview’s witness Shorr, another police officer, to admit she found the post on a company computer while at work, thus breaking the same rule.

Paul got the chance to cross-examine Durden and was quick to object to the judge that the witness wasn’t answering yes or no to questions. The objection was sustained and Paul went on to argue that Durden didn’t allow any time for counseling Greenwood before firing her and that Durden would prefer to have Shore as a detective on the squad, which was Greenwood’s position before her termination.

“Chief Billie Durden was not consistent with the treatment sustained by Greenwood, and she was retaliatory when she found out about the ReillyBook post,” Paul said to the judge, opposing team and the audience.

The defense ended the trial with their closing argument that Greenwood was justly terminated for poor job performance and not for her post on ReillyBook. After the closing arguments the teams were allowed two minutes to announce any violations the other team had made, which could result in points lost. Neither team chose to do so.

Albert Lea team member Klapperick played Greenwood and said it can be hard to play that part because the other team makes her out to be a bad person. She has more fun when Albert Lea plays defense, during which she plays Rin T. Tin. Klapperick said she’s somewhat sad that the season is almost over but that the team has been having a lot of fun.

“I’m sad to be almost done but excited we’re at state,” Klapperick said.

Last year the team placed sixth out of 12 teams in the state after being narrowly defeated by the 2010 national champions of Breck High School. There are about 90 mock trial teams in the state. Three other teams from Albert Lea competed throughout the season, but only the varsity made it to the state tournament.