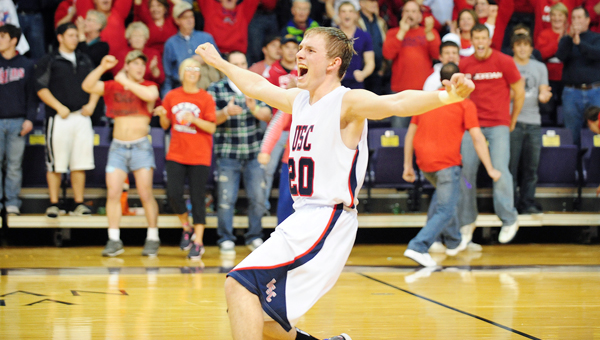 MANKATO — United South Central hadn’t hit a shot from behind the arc all night when junior Cole Stencel let one fly from the top of the key.

After seeing a flurry of 3-pointers bounce off the rim in the Section 2AA semifinals on Monday night at Bresnan Arena in Mankato, the Rebels’ fans, holding their breaths in a sea of red late in the game, had little reason to believe the next one would fall.

“I couldn’t hit anything,” said Stencel, who finished the game with six points.

But despite sinking into a shooting slump while the Rebels trailed top-seeded Hayfield for most of the game, Stencel saw the glass half full and seized the opportunity. 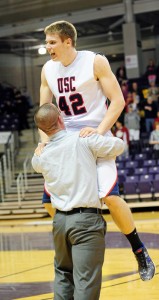 Kyle Bauman passed out of a double team to Stencel, who drilled the 3 to give the Rebels, who trailed the Vikings (22-6) for all but six minutes, a 39-37 lead with two minutes remaining.

“I still had to keep shooting,” said Stencel, who said his misses felt good but were just off the mark. “We needed a big swing.”

The Rebels (24-5) knocked down just enough free throws in the final minutes and made defensive stops to hang on and win 43-39, sending the program to its first section finals appearance in 12 years.

After a sloppy start to the game — the Rebels had eight turnovers and no points in the opening six minutes — USC ended the game on a 15-4 run after trailing by as many as seven with 6 1/2 minutes remaining.

“I’m just happy for the kids,” Rebels coach Robert Stevermer said. “They really worked hard to get to this point, and at halftime they said ‘We’re not done yet.’”

No points were scored for nearly four minutes to start the game as both teams looked rattled to start. The Rebels held Hayfield’s sharp-shooting senior, Bobbie Stephens, who made a school-record 10 3-pointers in the section quarterfinals, including eight in the first half, without a long ball until the nine-minute mark and trailed just 14-13 at the break despite recording one fewer turnover than point.

But the Rebels came out strong in the second half and took its first lead at 21-19 when Bauman scored a layup following an offensive rebound. 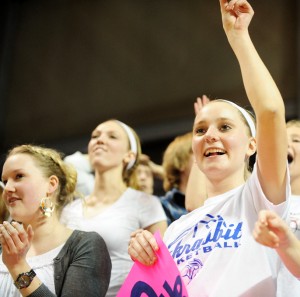 Stencel ended the Vikings’ run after putting back on offensive rebound — USC outrebounded Hayfield 41-20 — and baskets from Coleman Bushlack and Bauman trimmed the lead before Stencel hit the dagger.

Bauman notched a steal on Hayfield’s ensuing possession, and the Rebels went 4 of 8 from the free throw line in the final 46 seconds to ice the game.

The Rebels celebrated with its student section nears it bench immediately following the game, and again after it received its subsection championship trophy.

Bauman, who will play next season at Winona State University, finished with a game-high 19 points and said the moment hadn’t fully sink in.

The Rebels will return to Mankato on Friday to play St. Peter (27-1) in the Section 2AA championship game, which tips off at 8 p.m.