The future of the Minnesota Vikings stadium bill entered even murkier waters this week.

A Friday legislative deadline where bills must pass committee came and went without action on the main stadium bill. But House Speaker Kurt Zellers said blowing past the deadline should not be the main concern for supporters of the stadium bill, calling the current proposal flawed and raising questions about the state’s main funding source. 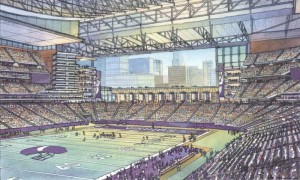 A rendering of the view from inside a proposed Vikings stadium.

“We will not leave here with a bad deal for the taxpayers,” Zellers said at a news conference.

Zellers voiced concern that gambling revenue — which is supposed to pay the state’s share of the $975 million stadium in downtown Minneapolis — could fall short and that the Minnesota treasury would be left on the hook, creating more uncertainty for the bill.

Under the plan, the city of Minneapolis would pay $150 million and the Vikings would pay $427 million of the $975 million stadium. That leaves the state’s share at $398 million.

If tax revenue from electronic pulltab gaming doesn’t produce enough revenue, however, the burden would fall on the state’s general fund, said Dan Dwight, committee administrator at the House, a Republican. He said that aspect of the bill is “pretty much a nonstarter with people in the committee.”

“What happens if the electronic pulltabs don’t do the trick?” said Rep. Jeanne Poppe, DFL-Austin. “What’s the backup plan?” 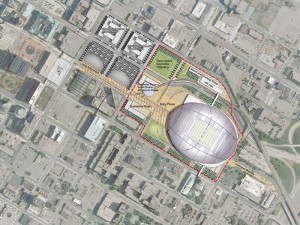 An aerial rendering of the proposed Vikings stadium in downtown Minneapolis.

“The numbers are all over the place,” he said.

Taxes aimed at those who used the stadium, he added, seem a better option. These would be levied on goods like Vikings memorabilia and tickets.

“It’s a very detailed plan, and evidently we don’t have all the details yet,” Murray said. “It faces an uphill battle right now.”

Whether the pulltabs bring in sufficient revenue isn’t the only point of contention. A lot of people simply don’t want to see expanded gambling, Poppe said, and others would rather the state focus funds on education.

Republicans on the committee are concerned the charities that benefit from gambling revenue would suffer, as the tax relief offered as part of the deal might not be enough.

“We don’t know if it’s quite there yet,” Dwight said.

State revenue commissioner Myron Frans said the predictions are difficult because there’s no real example for the state to follow in terms of a big expansion of electronic gambling.

“They’re reasonable,” he said of the estimates. “They’re actually conservative in some ways, but they are a projection.”

The proposed 65,000-seat stadium would have a fixed roof and as many as 150 suites. The team hopes to begin playing in the new stadium by the 2016 season.

A stadium bill did pass Friday, just not the main one. A rival bill authored by state Sen. Roger Chamberlain, R-Lino Lakes, passed the Senate Committee on Commerce and Consumer Protection on Friday by an 8 to 5 vote.

Though the bill wasn’t supported by the team or by Gov. Mark Dayton, it still could play a key role. Senate Democratic Leader Tom Bakk suggested that bill could eventually serve as a vessel for a negotiated stadium bill.

“Nothing is ever dead around here,” Bakk said.

— The Associated Press contributed to this report