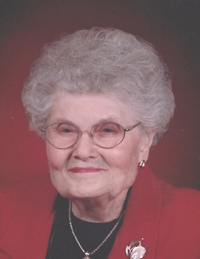 Viola was born on Jan. 29, 1914, to Roy and Mae (Carle) Wood at their farm home near London. When Vi was four years of age, she moved with her parents to Mora. Returning to Austin in 1928, she graduated from Austin High School and Normal Training. Vi taught school in Oakland until her marriage to George Waterman on June 28, 1934.

When her daughters were grown, she returned to teaching at Rural School District No. 93 near Waltham. When the school closed, Vi began working at Younkers where she worked for more than 20 years before retiring in 1979.

Vi was a charter member of Crane Chapel since 1940. Over the years, she served as Sunday School Superintendent, taught Sunday school for more than 50 years, was President of the Women’s Missionary Society for several years. Also, for many years, Vi was active in the Comforcare Auxiliary serving on the family council and the official board. She was a Friendship Bible Coffee Guide through Christian Women’s Club.

Whether it was for family or friends, she was a good listener and faithful prayer warrior to lift their needs to the Lord.

Vi had a ministry of taking food to people when there was sickness or death in a family. When her children were young, they remember Vi giving food to their friends who were underprivileged or to bums who would come to her back door from the railroad tracks. No one was ever turned away.

Funeral services will be held at 1:30 p.m. Friday at Crane Community Chapel with the Rev. Dale Christiansen officiating. Interment will be at Grandview Cemetery. Visitation will be at Clasen-Jordan Mortuary from 4 to 7 p.m. Thursday and at the church on Friday for one hour before the service.