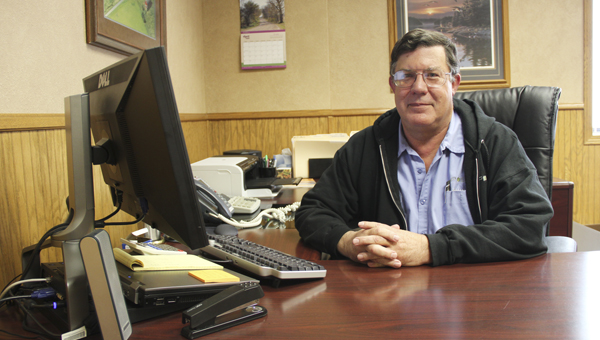 GLENVILLE — The new manager of the Poet Glenville ethanol plant might be the only man in town who deals with fermentation at work and at home.

David Smith began at the general manager of the plant Feb. 13 and is learning the ins and outs of the plant, the ethanol industry and his new home of Albert Lea.

He also enjoys brewing his own beer at home, among other hobbies ranging from being an avid woodworker to touring on his 1987 Yamaha Venture Royale. At work, he leads a 46-employee plant where they brew corn into fuel for automobiles.

Smith comes across as approachable, which he said makes for a free exchange of ideas.

Before working for Poet, he and his wife, Jane, were on a six-month break from work altogether. He had headed a potato-starch plant in Stevens Point, Wis., for seven years. The 250-employee company, Penford Food Ingredients, transformed potato starch into all kinds of products, such as one that adjusted the viscosity of batters.

Why the break? Their three children were grown and they wanted to return to their home state of Minnesota. The break gave them time to visit their son, a physicist in England, and for Smith to spend time with his father on a small farm north of Stillwater.

Smith, 58, grew up on that farm near Scandia and Marine on St. Croix, two towns people often call as one: Scandia-Marine. His father was a University of Minnesota professor of agriculture.

Smith graduated from Forest Lake High School in 1972. He was a jock in high school, playing football, wrestling and track. And music was important in his family. He spent 10 years as a child learning to play classical piano, and he was in the high school band. He can play tuba, baritone, sousaphone and tenor saxophone, in addition to bass guitar and, of course, electronic keyboard.

So after he graduated, he was to attend the university where his father taught. But first, his father sent him to England for six months, where he made friends, explored Europe and took some interesting classes. One was the British history of the American Revolutionary War.

Smith said the British tell the story from the perspective of “they were trying to help us and we were a bunch of rabble-rousers,” with no mention of taxation without representation.

At the U of M, Smith had a double major, one in agronomy and plant genetics and another in agricultural economics. His father, in fact, often taught his classes.

His first job out of college was as a field supervisor for Del Monte in Sleepy Eye. He supervised work on sweet corn and peas. In 1990, he became a field superintendent at a Del Monte operation in Wisconsin. He was promoted in 1992 to plant manager and the following year to area manager — overseeing fields and plants.

By 1996, the corporate ladder he had climbed was falling apart. The canning industry was in trouble, so he found work in the then-thriving dairy industry, working for Schreiber Foods in Wisconsin for a year and a half.

At a dairy show, he met officials with Land O’ Lakes and was recruited away by them. There he worked until 2004, when he joined Penford Food Ingredients.

Smith also is a former volunteer emergency medical technician. He did that work starting in Sleepy Eye and continuing in Wisconsin. It brought joy and sorrow; he has delivered babies and has had people die in his arms.

“It’s a very close group of people who do that sort of work,” he said.

Smith said he had been following the ethanol industry and had hoped for a role in that industry when a headhunter put him in touch with Poet.

He said he has made slight changes since coming on at the plant but mainly is getting to know the people and the work. He replaces Rick Mummert, who now works as a realty agent in Albert Lea.

Smith said he comes in at 5 a.m. so that he sees some of the work done by both shifts. He said he manages by “wandering around.”

“I like to spend time with the folks who do the work so I can learn what they do,” he said.

He said when a problem arises, having close knowledge of how the work gets done adds a dimension to management decisions.

He said he pushes the concept of teamwork. He prefers the pronoun “we” over “you and I.”

“Your job,” he said, “is no more important than mine.”

The farm kid will oversee coming expansions at Poet Glenville. Details remain in the planning stages, but in general it will be adding a line to turn corn oil into ethanol. Right now, the plant turns kernels of corn into ethanol. The expansion will bring two additional fermenters, upgraded control systems and an effort to conserve more water during the ethanol-making process.

What Smith likes best about working for Poet is that ethanol is a renewable fuel, and he praised Poet for reducing waste at every opportunity.

What comes in presently are kernels of corn and water. Poet Glenville turns that into ethanol, feed and carbon dioxide. Water is the only waste.

And when he isn’t leading a team of ethanol makers, you might find Smith cooking, trapshooting, fishing or even swinging a hammer with Habitat for Humanity. First, he is eager to get out of a local hotel and into a house so he and his wife, Jane, can get on with their lives.