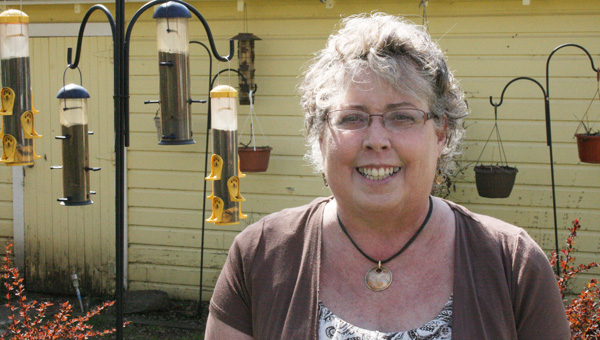 It has been more than one year since Mary Mueller of Clarks Grove had a stem cell transplant in Rochester after being diagnosed with myelodysplastic syndrome in May 2010. -- Sarah Stultz/Albert Lea Tribune

A woman in her 50s, Mueller said she became tired and would get bruises easily.

In a matter of a few weeks, the doctor diagnosed her with myelodysplastic syndrome, also known as pre-leukemia. Leukemia is cancer of the blood.

“It was a shock; it was unexpected,” Mueller said. “But by the time we went to the doctor I had done enough research that I knew it was one of four things. They were all serious.”

Now, as she looks back on that time — having since gone through chemotherapy and a stem cell transplant, spending at least six months straight in Rochester — she said she is grateful for her faith, family and friends which have helped her stay positive.

Her doctors have called her a “miracle patient,” she said.

To celebrate all that Mueller has overcome and to help with the hospital bills and other costs associated with her diagnosis, her friends and family have organized a special celebration benefit Saturday evening with all proceeds to benefit Mueller.

The event includes sloppy joes, a beanbag tournament, live music and a silent auction, among other activities. Some items up for auction are a hotel stay, sporting tickets, baskets and golf items.

Elizabeth Abts, one of Mueller’s daughters, said the support of the community has been “amazing” toward her mother.

“The community is so willing to reach out,” Abts said.

Muellera said when she first found out her diagnosis she was told she could live 10 to 15 years. But that estimation quickly decreased to where at one point she was told it was much more serious.

Mueller’s condition went from slow progressing to aggressive in a matter of days, even in the midst of chemotherapy treatments.

In January 2011, she began preparations for a stem cell transplant — her donor was one of her younger sisters. On March 10, 2011, she went through the surgery, but that wasn’t the end of her troubles.

She remained in Rochester until June of that year, unable to care for herself. She received care from her husband, Frank, and daughter Elizabeth, while also dealing with some side effects from the transplant.

The daughter noted how kind her father’s employer, Minnesota Freezer Warehouse, was in allowing him to take time off to spend with her mother.

“I’m grateful to see such a loving relationship between my parents that I don’t think most people get to see,” she said.

Mueller said through it all it was her faith, daily prayer and support of family and friends that helped her get through her challenges one day at a time.

“When you’re faced with something like that, you find out what you’re made of very quickly,” she said. “The will to survive is very strong.”

She added that she learned to develop patience, knowing that she wasn’t going to get better overnight.

“She is the cornerstone of our family,” Elizabeth said.

If you go
What: Celebration of life benefit for Mary Mueller
When: 11 a.m. to 3 p.m. Saturday
Where: Crossroads Evangelical Free Church
What else: Sloppy joe dinner, bean bag tournament, silent auction, bake sale