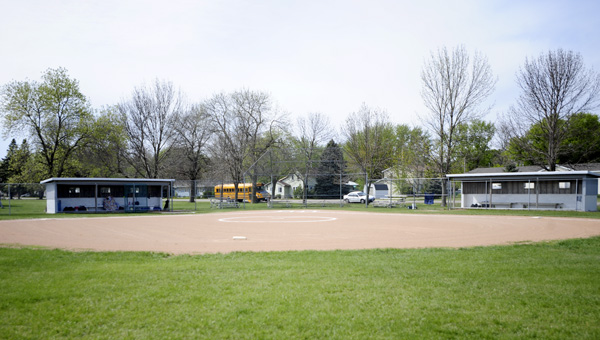 After receiving a $5,000 grant from the Minnesota Twins that was matched by the Glenville-Emmons athletic booster club and high school, the fields at the school were updated.

GLENVILLE — About a year and a half after Lisa Ziebell and Angie James started to draft a grant, the three ball fields at Glenville-Emmons High School have had some necessary updating completed.

Ziebell and James wrote to a committee of the Minnesota Twins looking for a grant to help with the fixing of the Wolverine’s two softball fields and one baseball field.

The grant is part of the Twins Community Fund’s Twins Fields for Kids program.

The program was started in 1999 and has granted nearly $2.5 million since then to improve fields in the upper midwest and the southwest Florida regions.

Ziebell, the softball coach at Glenville-Emmons said a lot of people in the area don’t know the grant even exists.

Ziebell said she went looking for a grant after the softball fields became unusable.

“The JV field wasn’t even suitable for practice,” Ziebell said. “If we got heavy rain, it was like a little pond out there.”

The program offered a matching donation up to $10,000 so it was up to the athletics booster club and the high school to come up with an amount.

So, after the school and booster club came up with a total of $5,000, the Twins gave the school another $5,000 to put toward their field improvements.

Even though Ziebell was pushing for the softball equipment to be updated, she made sure to include the baseball field.

“We did what we could with the money,” Ziebell said.

“It’s a good cause,” Glenville-Emmons athletics director Craig Rayman said. “For schools with a limited budget, they’ve got the money to help.”

Ziebell said one of the main reasons she thinks the school was approved for the grant was because the fields are used only by kids and students in the community.

Whether it be the community pee-wee or midget softball teams, the community baseball or T-ball teams or just kids from the community on a summer night, Ziebell said it’s important to be able to have the fields intact.

“Anything that can help get kids outside is a huge step for the community,” Ziebell said.

The high school softball team especially would like to thank the Twins for their generous contribution.

“The Twins are a positive and huge icon in the state of Minnesota,” Ziebell said. “And, it’s pretty cool to have their logo hanging on your fence.”