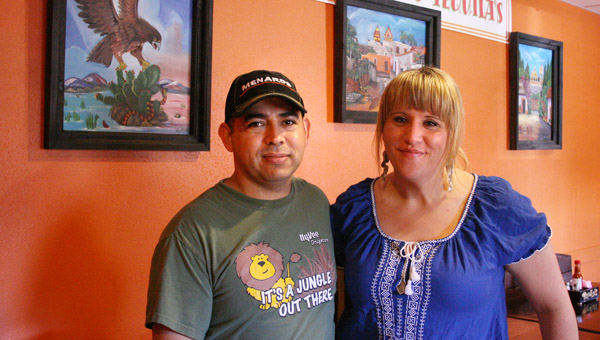 Of Mexican heritage, he came to the United States when he was 17 years old.

Using his mother’s recipes, plus his own cooking intuition, Ramirez and his wife, Shawna, opened Tequila’s Bar & Grill last June.

At 846 Central Ave., the restaurant offers traditional Mexican dishes such as burritos, enchiladas, fajitas and quesadillas, among others.

“I try to make fresh food every day for the customers,” he said.

And so far it has been paying off.

The couple said sales have gone up by 30 percent since they first opened.

Shawna noted the restaurant gets many people from out of town, including from cities such as Albert Lea in Minnesota and Mason City in Iowa.

Since they live in the apartment above the restaurant, Shawna said they are involved with the day-to-day operations there.

While Manuel works in the back preparing the food, Shawna works in the front, greeting customers and working at the cash register. Having had previous experience in the hospitality industry, Shawna said the store is a perfect fit for her.

The couple purchased the building in 2009 after looking in several small towns for a building that might be a perfect fit.

Originally from Algona, Iowa, Manuel and Shawna gutted the building and started from scratch.

Manuel said they have put down more than 2,000 pieces of tile and roof, handmade new wooden booths, among other renovations.

The walls are painted with bright reds and paintings were hung.

After several years of fixing it up, the restaurant is typically busy during the lunch hour and again during dinner.