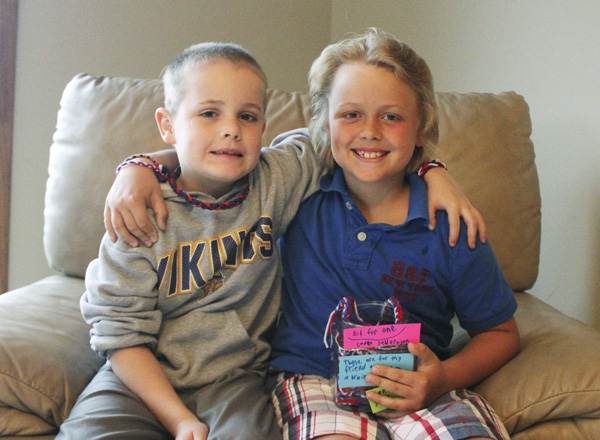 Pals Jaeger Venem, left, and Caden Severtson pose for a photo. Caden is holding a jar with bracelets much like ones he put at area businesses. -- Kelli Lageson/Albert Lea Tribune

Never underestimate the power of friendship.

A 9-year-old Albert Lea boy has raised about $1,000 selling homemade bracelets to help family friends with medical bills for a 7-year-old who has a brain tumor. 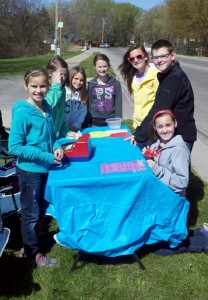 Students from Southwest Middle School recently held a bake sale and raised $300 to give to Jaeger Venem and his family.

Caden Severtson is the son of Nicky and Chad Severtson and has been friends with Jaeger Venem almost his whole life. Jaeger is the sone of Chris and Heidi Venem. He got the idea for making bracelets when he saw a similar trend for injured hockey player Jack Jablonski. He only uses red, white and blue yarn, and there’s a specific reason for that.

“So everyone knows they’re for Jaeger,” Caden said.

Caden gets help from family members making the bracelets because there has been such a demand. He’s made about 1,000 bracelets and is selling them for 50 cents, though often he gets larger donations.

“He said to me, ‘Mom I’m going to make some bracelets and sell them for 50 cents to help them with hospital bills,’” Nicky said.

He’s had success selling them at school, and there are bracelets for sale at local businesses as well. Nicky put the information on her Facebook page, and they’ve gotten donations in the mail and sent out bracelets around the country.

The Severtsons will present a check to the Venems at a benefit this Saturday. The benefit starts at noon and runs until 1 a.m. at Pub 69 in Twin Lakes. Children are welcome during the day, and there will be activities for kids. At 1 p.m. there will be a bean bag tournament, and people can call Pub 69 at 852-2200 if they’re interested.

From 4 to 7 p.m. is a live auction, and from 8:30 p.m. to 12:30 a.m. Tom Wurth will perform. There will be a silent auction, too, with donated goods including a NASCAR helmet signed by 12 Chase for the Cup Sprint drivers, including Jeff Gordon, Jimmie Johnson and others.

There will also be a meal featuring donated items like pulled pork sandwiches from Geneva Meats, Mrs. Gerry’s salads and desserts. Donations will be accepted.

Jaeger won’t be able to attend his benefit as his first surgery is today, and he will most likely have a second on Friday. If he can, he’d like to visit briefly using Skype from his hospital room. He’ll then spend about seven days at the hospital and six weeks at home recovering.

Jaeger’s mom, Heidi, said today’s surgery is exploratory, which will monitor the seizures caused by the tumor. The second phase would be to remove as much of the tumor as possible.

Jaeger has a CaringBridge site at www.caringbridge.org/visit/jaegervenem. If you can’t attend the benefit and would like to donate make checks payable to Chris or Heidi Venem and mail to American Bank, 217 S. Newton Ave., Albert Lea, MN 56007.

The boy has people all around town fighting for him, not just Caden. A group at Southwest Middle School recently held a bake sale and raised $300 last Friday.