A night of Knights 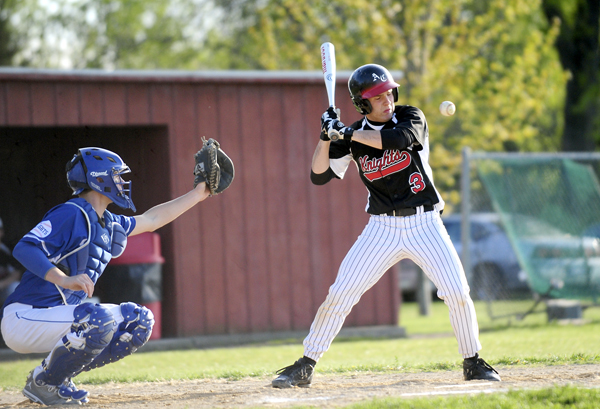 A ball spirals toward Alden-Conger’s Jordan Johnson on Thursday.

ALDEN — The Alden-Conger baseball team’s 22-6 loss to Lake Crystal-Wellcome-Memorial on Thursday wasn’t due to a lack of effort, nor lack of time. To finish all seven innings, the game lasted nearly three hours.

“It was a good game for a while,” A-C Knights coach Sam Hintz said. “We actually played one of our better games of the year as far as our errors go.”

The LCWM Knights had a 9-1 lead at the top of the third.

The Alden-Conger team quickly closed the gap scoring five runs in the bottom of the inning.

“We were able to throw a bunch of hits together and started taking bases,” Hintz said. “It was the second time through the order so they’d already seen the pitcher once and caught up with him.”

The score remained 9-6 until the top of the sixth when LCWM started getting hits.

Between the sixth and seventh innings LCWM scored 12 times to finish the game 16 runs ahead of Alden-Conger.

“They just weren’t getting out,” Hintz said. “They were hitting the ball where it needed to go and when we had a play that was close, we just couldn’t make it.”

The A-C Knights became discouraged when LCWM started picking up several runs in a row.

“I told them that sometimes the teams they’re playing against are going to get real hot and there isn’t anything to do except wait it out and hope for the best,” Hintz said.

Hintz said the team now will get to work making the plays they need to in practice in hopes it will carry over to their games.

“Our biggest problem right now is errors and just not knowing what do do on defense.

The A-C Knights will play their next game 5 p.m. Tuesday against Cleveland.